* First Thanksgiving without a turkey. I don’t know why we skipped the big bird, but there was a leg of lamb and roast beef and a chicken instead, so who could complain? I had offered to make stuffing, which I had done already by the time the decision was made to omit turkey. For my part, the turkey went unmissed. I credit this entirely to the three quarts of turkey stock I made. I wouldn’t have expected to miss turkey, but Thanksgiving without stuffing and gravy is just a pain-in-the-ass dinner party. The stock, which had been reduced to the point of really being more of a turkey demiglace, became the drippings in the stuffing and the basis for a gravy so good several people were seen eating it with spoons. The flavor you can get out of five pounds of spare parts, some veggies, and two gallons of simmering water will never stop amazing me.

* When I was little, my mom used to shop for groceries in peace by plonking me in the seat of a Jewel shopping cart and handing me a tube of Oscar Meyer liver sausage and a spoon. The cashier would just ring-up the wrapper when we left. I adapted this system during the near-riot that was 530pm on the Wednesday before Thanksgiving at Meijer. So does family tradition pass down. And Tanisha didn’t even flinch when she rang up a six-pack of Fat Tire with one empty.

* I went to Costco to buy a few bottles of wine for dinner. I have a system for wine buying that’s based on the Venn Diagram – I put in a few parameters, and walk away with my criteria. In this case, the parameters were “Special Occasion” and “Costco”. The first means I can spend up to $25 a bottle, and the second means I lean heavily on the little one-graf descriptions of the vino that’re festooned all about the display case, describing the wine after inevitably giving it a numeric score in the high 90s. (I ignore numeric scores. I feel about numeric scores on wine the way I feel about Ivy League grades: I’m gonna need to see something below “B+” before I believe all the A’s.)

So what I look for, in those little reviews, are the words that I know tend to signify something I’ll like. Those words are “earthy,” “mushroomy,” “tobacco,” “smoky,” “chocolate,” “tannin,” “black dirt,” “tar,” and “truffles.” And there was, in three aisles plus the Platinum Club Rack, NO MENTION OF ANY OF THOSE AT ALL. Even the reliably dirty-funky varietals like Malbec and Bordeaux were tagged with things like “juicy” and “blackberry” and “cassis.” I was confused: Is my taste that uncommon, or is Costco just in the business of selling Sno-Cone syrup?

I’m fairly accustomed to the former. For example, I’m also usually the only one at Scores ignoring the pigtailed plaid-clads in favor of the thirtyish bartender with the pink hair and tattoos. so, standing in Costco, I called a friend who is Into Wine. His explanation is that the vast majority of Costco customers are turned off by the very words I’m looking for, so the reviews are written for them. He also pointed me at the Kirkland Chateau Neuf-de-Pape, which he correctly described using the traditional French idiom, “world fucking class.”

I threw in the towel and bought a bottle of Kirkland Anejo instead. (Peppery, with caramel notes and a nice smoky bite at the finish.)

* Went to a pie-themed party on Saturday. I made Pecan Pie Shooters, the second go-round of which was delicious. The ingredients: Vodka, dark Karo syrup, bourbon, maple syrup, brown sugar, 4-4-2-1-1, shaken, and served in shotglasses (okay, Dixie cups) rimmed with pecan chips and Karo syrup. When testing that recipe, I had used room temperature ingredients, and it was great, but a little bruised by the ice. I don’t like watery drinks. So before the party, I stuck the vodka and the bourbon in the freezer.

The first round was not well-received. Couldn’t figure out why, til I opened the shaker and saw the huge frozen mass of syrups and sugar in the bottom. The first round was, in retrospect, a round of frozen vodka-bourbon shots. Apparently Karo congeals faster than vodka warms. Lesson learned.

* For those of you who thought I was exaggerating last week, especially about the hundred-pound dog who spends the entire day sleeping in the exact center of the kitchen floor, I present you without further comment Roxy, ninety minutes before dinner: 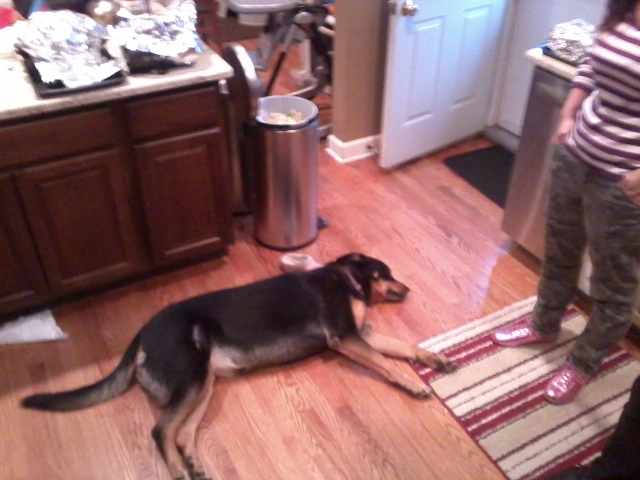