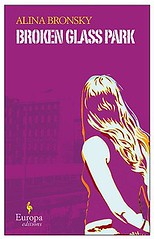 The hoopla has been intensified by the mystery surrounding the thirtysomething Bronsky, who writes under a pen name and immigrated to Germany from Russia when she was 13. Originally published two years ago as Scherbenpark and recently translated into English by Tim Mohr, Broken Glass Park follows the plight of Sascha Naimann, a 17-year-old Russian immigrant who lives in a ghetto in Frankfurt—though to call her existence “living” is to understate the horrors of her situation. Having witnessed the murder of her mother and her mother’s boyfriend at the hands of her stepfather Vadim, our heroine struggles to coexist alongside a fury that she may not be able to contain: “Sometimes I think I’m the only one in our neighborhood with any worthwhile dreams. I have two, and there’s no reason to be ashamed of either one. I want to kill Vadim. And I want to write a book about my mother.”

A multilingual scholarship student at a Catholic school, Sascha is not your typical housing-project tourguide; the lonely burden of being the smartest girl in the room is compounded by her role as translator for her Russian guardian Maria (a responsibility all too familiar to immigrant children) and as big sister to four-year-old Alissa and nine-year-old Anton.

We follow Sascha as she skips out of school, confronts the journalist who interviews Vadim in prison, and dodges the advances of “Peter the Great,” described as “six and a half feet of muscle and acne, adrenalin, and testosterone, and whatever it is you get when you sniff glue, all packed into oddly tight jeans and a white T-shirt.” If the atmosphere of drugs, self-destruction, and the threat of sexual assault makes you want to run to the nearest tram, Sascha’s voice—fierce, intelligent, and at times, tender and hopeful—will keep you in the neighborhood. Sascha’s love for her siblings and her grudging affection for Maria keep her from going completely off the deep end, and Bronsky’s confident writing and mastery of pace include enough wryness to balance the devastation: a neighbor is described as having “a look on his face as if someone just shoved a cactus down his pants.”

Though the threat of violence helps keep the pages turning, Bronsky reveals our own complicity in the tabloid treatment of Sascha’s life: When Maria is described in the newspaper as “the only living relative willing to look after the three children left behind,” Sascha clarifies: “And Maria didn’t sacrifice some priceless existence for our sake: when you work in a cafeteria in Novosibirsk and you’re asked if you’d like to move to Germany to make soup for a few kids, you’ve hit the lottery.” Teenage irreverence aside, this correction of the reader’s perspective highlights our tendency to sentimentalize tragedy. The relationship between the media and the “victim” is explored even further when Sascha meets newspaper editor Volker Trebur and his teenage son Felix, a duo whose influence teeters on the border between help and harm.

If an American had written Broken Glass Park, it might easily have been dismissed as a young-adult novel. That label would have been too simplistic. Teenage protagonists, with their underdeveloped frontal lobes and their raw emotions, are perfect submersibles for exploring our inability to connect. (Witness the wonderful scene between Sascha and Felix when, unable to talk without awkwardness, they begin to type their conversation into Felix’s computer instead.) In a parallel literary universe, while Holden Caulfield wanders Central Park in search of a cause, Sascha Naimann dares to walk barefoot in a park littered with glass, searching for a future that will not cut her to pieces.

Pity the state of very short fiction. Not only are we unsure what to call it—the term “microfiction” implies that we need corrective lenses just to lay eyes on the genre—but when we do manage to refer to it at all, the labels we conjure sound vaguely perverted (e.g., short short, flash fiction). No matter what you call it, the shortest of the short is the literary equivalent of a flaming Sambuca—a bracing event that you may find yourself wanting to repeat over and over again.

In the amount of time it would take to blow a bubble and watch it pop, you can read one of the 120 compositions that make up Amelia Gray‘s AM/PM (featherproof books, 2009). This engaging collection abounds with tiny revelations delivered with great wit, a tour of 23 characters whose connections become slowly apparent as you go along. The menagerie includes Reginald, a furniture-store owner and Civil War reenactor whose disgruntled wife regularly draws him a bath full of mineral oil; Terrence and Charles, who are trapped together in a velvet box; and Leonard, an adult who tries to enter an elementary-school science fair with a volcano he’s named after Carla (a woman whose own entanglements skip across our consciousness). People couple and decouple with humor and absurdity, the best moments arising from the romantically recognizable: “They were in love! Carla wore her hair up and Andrew saw everything as a sign. They spent an entire afternoon sitting side by side in a coffee shop, taking more meaning than necessary from the world around them.”

These relationships don’t seem to exist in any physical dimension outside of the characters, yet here, the lack of specific setting (a shortcoming in traditional fiction) suggests the transient nature of romance. In Gray’s world, a PDF file is a symbol of love, and a T-shirt is almost its own character: “You are rigor mortis in clothing form, John Mayer Concert Tee. You accept the elements, the wearer and all his flaws, and your reward is a cramped place in the crack of a window, keeping out the morning sun.”