I’ve always been obsessed with sharks. I think the obsession began around the same time I decided dinosaurs were the coolest thing, and when that dinosaur obsession devolved into a mere interest, and then into a closet interest after the realization that I didn’t possess the requisite science or math abilities to be a paleontologist, my love of sharks stayed strong.

To this day I never miss Shark Week. I never pass up the opportunity to look at pictures of sharks on the internet or in magazines. I read about shark attacks like others read about sports. I always see the newest shitty shark movie on TV and always hate it a little less than anyone else.

When I moved to California in 2007 I was more than a little excited to be heading to a place where I might feasibly see a shark. Hell, I didn’t care about seeing them as much as I just wanted to know they were there. Around Scotland there aren’t any sharks.

In California I met a Canadian guy who was as crazy about sharks as me, and when some poor bastard was half eaten by a twenty-four foot long Great White Shark we both knew what we had to do.

That morning we each worked harder than we ever had in our lives to do an entire day’s work in three hours, then borrowed a couple of undersized, black widow-filled wetsuits and a couple of mountain bikes, and cycled to the ocean. 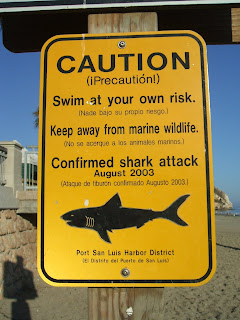 That was the first time I’d ever swam in the Pacific Ocean, and I had no idea how cold it could be. It didn’t make sense to me. In Scotland, the weather’s cold and the water’s cold. In California, the weather’s warm and the water’s… Well, I immediately regretted stepping into that freezing black oblivion. My toes felt like they were stabbed with knives, and then went numb to the point I wondered if they were still there.

Also, you’ve probably heard of that old and wise rule: Never Eat Before Swimming! I hadn’t heard of that and if Matt had, he certainly didn’t say anything. We ate the biggest damn lunch we could eat and then stumbled into the ocean; perfect floating chunks of shark-bait.

We swam out as far as it took for the people on the shore to become small ants before we both experienced the most awful cramps and some weird paralysis that saw us simultaneously incapacitated, floating pathetically atop the waves together.

“Matt! I can’t move!” I shouted, half laughing, half panicking. I really was stuck. The waves were pushing me from side to side and it was all I could do to keep my head above the water.

But things were about to suck more…

“What the fuck is going on?” Matt screamed at me, less laughing this time than plain panicking. He was staring back at the shore, and if he could have moved his arms he probably would have been pointing that way.

I looked and on the shore, with all the tiny little ant people I could see a fire engine, a police car and a ambulance. There were dozens of people gathered around the waterline, and the distinct and unmistakable shape of a human body being carried onto the shore.

“Fuckfuckfuckfuck!” Matt kept saying. I was thinking something similar.

We began to paddle furiously against the waves, which predictably appeared to have turned to pull us out to sea. We must have looked ridiculous, flapping our arms, crooked at the elbow and making no damned headway at all.

Suddenly we realized that there was no one else in the water. The entire beach was clustered with surfers waving and shouting at us. Of course, we couldn’t hear a damn thing, but it looked from that distance like they were shouting, “Shark!”

After a few minutes some surfers swam out and carried Matt and I back to the shore, where we were informed that the surfer whose body had been carried into the ambulance had been taken underwater by a nasty current, and his head had been smashed against a rock.

The blood and panic had resulted in a mass evacuation of the water, and indeed the people had been shouting, “Shark!” although there is nothing to suggest – apart from daily sightings over the previous week – that there had been a shark beneath us.

Nonetheless, I didn’t venture back into the water for the rest of my stay in the United States.

The Philippines: Bus crashes, paralysis and too much rum in paradise… Yellow eyes beneath a blue night sky…

In the summer of 2008 I was a little wiser, but not much. I still loved the sea, and no bout of fear was going to stop me from going back in the water. So I headed to the Philippines, to an area of Cebu with one of the densest Thresher Shark populations in the world.

It was an eventful journey. On the bus ride from the airport to the remote village I’d planned to visit my bus crashed going around a cliffside road hundreds of feet above the surf. After that I found myself speeding along on the back of a motorbike, desperately clutching my luggage, staring at the gravel path and hoping my face didn’t end up smeared along it.

When I arrived at my destination I assumed that after months in Korea’s sweaty heat I wouldn’t need suncream for a while. I wasn’t totally foolish – I just thought that a half hour walk wouldn’t do me any harm.

Needless to say, when I returned I was seared to the bone. I’ve eaten steaks cooked less than my skin after a half hour on the beach. I was also paralyzed in one leg.

My friend, Karen and I had waded out in the shallow water, wearing our sandals. After a while we realized there were sharp things among the seaweed and we walked carefully. But soon the swells were big enough to make it near impossible to walk and it was still too shallow to swim.

One swell managed to knock me over and my sandal fell off, and just for a second I let my foot touch the sand…

I’ve experienced a lot of pain in my life, and rarely have I ever made noise that reflects that pain. Seriously. I’ve suffered some agonizing pains, and I’ve never let out a scream.

Karen was kind enough to help me onto shore, by which time there was no pain and I felt foolish for having screamed. I tried to keep cool and pretend I’d just been startled, but I couldn’t feel my right leg.

Upon closer inspection I had two giant neon blue needles stuck in my heel and my whole leg was dead.

We hobbled back along the rocky beach to a fishing shack and consulted some fisherman who spoke no English. From what I could tell, they were trying to say that I needed to sit on my ass and drink rum for a week – no more swimming. 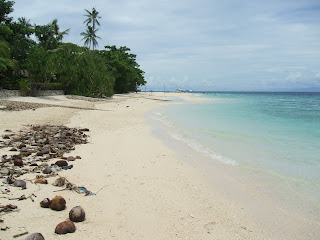 But that first night, after almost three days without sleep and having consumed more than a whole bottle of one dollar rum, I took to the beach with another friend, Dave. I was able to hop about on one leg, and then float in the sea – careful to check for paralyzing seacritters.

We drank rum and waded and floated around under the most amazing lightning storm I’ve ever witnessed – the whole sky turning blue, but with a sound. The air was so close and thick that I could hear nothing except when my friend spoke, and even then words stopped and dropped in the air.

It was dark, too. There were no lights other than the moon, the stars and the intermittent lightning bolts that illuminated the universe above and below us. We couldn’t see a thing, but we knew there were sharks everywhere. The diving instructors at the nearby boats had told us to be very careful.

I was swigging from the bottle, nipple-deep in the sea when Dave pointed at something very calmly. “What’s that?” he asked.

“Nothing,” I said, knowing probably wasn’t nothing.

“No, really. What’s that? Something’s moving…” He didn’t seem too concerned, but then again Dave was standing right near the shore and I was nipple-deep and half-paralyzed.

Suddenly Dave began backing out of the water, but he still didn’t seem too fussed. He was laughing, curious. “I’m going to get my torch,” he said. “There’s something big in there.”

I looked and couldn’t see much. There was certainly something moving – something big – but it could well have been a school of tightly packed little fish. Probably harmless. I said that to Dave as he disappeared back into the village.

As soon as he was gone I began feel as though I might crap myself. It was the same sensation I felt in the ocean in California – absolute terror beyond rational thought, as though my bowels might inexplicably cease to function. I couldn’t move, and it wasn’t just because my leg was dead.

But Dave soon returned, still laughing. He had a torch in his hand and walked calmly back into the water, waving it around. “Where’d it go?” he asked. I said I didn’t know, and he continued flashing the light around as I hastily paddled back to shore.

As we looked out on the water in which we’d just been swimming, Dave’s torch finally found what it was that we’d seen, and it wasn’t a giant school of fish. It was one giant being. Something big. Something with two eyes that caught the light of the torch and sent it back towards us. Skin that wrapped around one living thing, not a million. Something that had been swimming about our legs as we laughed and watched it, thinking it nothing but a harmless school of fish.

96 responses to “A Tale of Two Sharks”