A good friend in Oregon once showed Andre Tarkovsky’s Solaris to his movie group, resulting in him never being able to choose a film for the group again. Complaints about slowness, confusion about who is who. Solaris is slow and confusing. That is the crux of its art.

In Solaris, psychologist Kris Kelvin is summoned to go to a space station orbiting an ocean planet called Solaris. The crew there has endured severe emotional traumas and the goal of trying to study the planet has gotten nowhere. Kris is to assess what is going on but shortly after he arrives he starts to have hallucinations himself.

Solaris defies expectations for a “science fiction” film but it also defies itself. It is jumbled, like our brain pans, by design. Its mysteries manifold, it is a film that communicates through its cinematography, a rarity, but this communication is something so rich that it can’t digested in one viewing, or two…

I’ve only seen it three times in its entirety (reviewing a few individual scenes as well) and I confess it hits the mark as poems by Emily Dickinson and Wallace Stevens recently have for me. Like them and all great art it has been worked on and worked over and it is alive with truth and mystery, resisting simple comprehension. As Tarkovsky says himself of a portrait by Leonardo in his book Sculpting in Time:

We shall derive deep pleasure from the realisation that we cannot exhaust it, or see to the end of it. A true artistic image gives the beholder a simultaneous experience of the most complex, contradictory, sometimes even mutually exclusive feelings. (109)

As Dickinson writes in 519 (Franklin):

This is my letter to the World

That never wrote to Me-

The simple News that Nature told-

Her Message is committed

To Hands I cannot see-

For love of Her – sweet – countrymen –

Judge tenderly – of Me

and as Stevens says (in “Farewell to Florida”):

Her mind will never speak to me again.
I am free. High above the mast the moon
Rides clear of her mind and the waves make a refrain
Of this: that the snake has shed its skin upon
The floor. Go on through the darkness. The waves fly back.

…so Tarkovsky paints at the beginning of Solaris (after the Bach choral prelude which will recur throughout, sometimes slightly altered by electronica).

We begin with the lushness of the earth. Very easeful movement–a leaf moving on the water moves the camera slightly. Look at the first shot of Kris. Something is very unsettling in his countenance. We don’t know what is inside him and the process of revelation won’t be an easy one. Strangely it will match the last close-up in the film of him. Does anything happen in that time? Over two and half hours of film passes. Kris goes to the space station and sees his dead wife. And when he tries to get rid of her she returns. And when she kills herself again (she killed herself in real life) she gets resurrected. A lot happens. But do our expressions really change? There is no voice-over in the film, the viewer, infers the emotions, as one tries to infer from people one sees in daily life.

See the compelling camera move beginning at 4:28 where it cranes up from the giant leaves to a shot of more lush vegetation with mist. This mysteriousness mirrors the mind of Kris.

***
Solaris is enigmatic for many of reasons. Despite being a “science fiction” film, it is very quiet. Most of the music, including the ominous chords that accompany the ocean on Solaris is played at a quiet level (compare this to the ear splitting acoustics in Lynch and the giant bursts of music in Kubrick–the two American filmmakers [along with Malick] most kindred to Tarkovsky), with the Bach organ piece continually dulcet throughout–until the end. Also when the characters speak there is not much background sound or shuffling of feet and bristling of clothes when they move. Indeed there have been many complaints that the sound is too low, but no–Tarkovsky wanted to amplify the image. When the ear isn’t being numbed by sound effects the eye has to work harder. This is often the case in Tarkovsky’s films. What sound or music there is is at a low level so the image supersedes it. 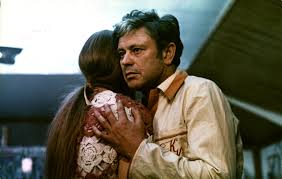 The structure of the film is jagged and one has to work to gather the story together. Essentially the film is a journey. There are disturbances at a space station and Kris is enlisted to go and check what is going on. We don’t know from the first forty-five minutes (the scenes on earth before Kris goes to the space station) what exactly is at issue personally for Kris, though his life is well disturbed. We don’t know who the older woman who lives at the house with his father is. We see two photographs of two young beautiful women but we don’t know who they are (they are both dead–one is his mother and one is his wife). We are also given a long sequence with the questioning of a former astronaut about the hallucinatory effects on people in the space station from the Solaris ocean and though this is important to the plot (to build suspense), it subjugates the really purpose of the film–to probe the character of Kris who doesn’t know how to love, who is lost, who may never have appreciated his wife when she was living (but she will reappear as his hallucination). But this subjugation apes Kris’s mind. He at first refuses to look at the past, so Tarkovsky casts the viewer into a similar pool of forgetfulness, as one blocks out the traumatic events in one’s life.

It also should be noted Solaris was composed with three different stocks of film, but this was an outside restraint. The Russian film industry only gave Tarkovsky a certain amount of Kodak stock and he used black and white and an inferior Russian color stock as well. The many long shots were explicitly set out to be shot with the short supply of Kodak stock.

The last two/thirds of the film are less concerned with science–science has already ravaged people and the film becomes what it always has been, the record of a man’s spiritual quest. Kris starts telling the truth about his life because he is privileged by the mysterious ocean to do what we all dream–to talk to, see and touch dead “loved” ones who have come back to life.

In the penultimate scene before the climax of the film, Kris begins to get a fever.

The process of the film jettisoning itself to become something beyond cinema is startling and happens in a relatively short time. At 1:23, spoons and an apple are shown contained in a glass vase. It’s a very brief close-up after a long shot of the swirling, jaundice Solaris ocean. But Hari’s shadow crosses over the vase and she jumps on the bed saying, “I love you.” Then after Kris hugs her on the bed, there is a dissolve at 2:10 from their heads to Kris sleeping on his side of the bed, but abruptly, before finishing the dissolve is a cut to Hari’s shawl (a piece of clothing all Hari’s in the film have worn, even the real life Hari, documented in a home movie). Twenty seconds later another dissolve mirrors the first, but this one is most startling. There is a medium shot of Kris standing, looking worn and then a medium shot of his head turned to the camera so his face has become the back of his head. All of this occurs in barely two minutes of  film time. A few shots in a few minutes to change the course of a three-hour film. One can’t doubt the ocean is working on Kris, the mysterious swirls and streams of water knowing what he needs more than anyone.

As the fever continues and builds, so does the surrealism of the images. At 7:38 there is a glorious fifty-second continuous shot mixing the many Hari’s at the space station along with Kris’s mother. The balletic back and forth of zooms and tracks seems a perfect formula for capturing the delirium he finds himself in. In a film about a man who is fairly emotionless and half-hollow, a sickness necessitates his being able to find love and the two women in his life who have accounted for the most love are his wife and mother. In this scene the mother is very remote and only at the end does she kiss his neck and comfort him.

The Ending. Kris returns to Earth or seemingly returns to earth in this clip. It is unknown. It is debatable because the last shot of the film shows the patch of land containing his house as an island on the Solaris ocean. This could be metaphorical though, yet it is what happens before the final shot that makes the film the round, whole experience that it is.

The clip begins with the same lushness in the pond and this time we are shown a close-up of the back of Kris’s head, in contrast to the first scene in the film and an echo of the front/back dissolve during the fever sequence. Bach plays again but now is heavily mixed with electronica. When Kris looks at his house though, the pile of belongings that he burned before leaving is still smoldering. Walking toward the house at 2:38 the ominous Solaris ocean themed music starts. Why is it raining inside his house? Why do father and son look at each other so mysteriously? Tarkovsky is psychologist enough to float the idea that the problem at the base of our romantic relationships is fused to the connections or non-connections to our parents. Kris’s father, who goes missing for a good two hours of the film (except a brief appearance in the home movie sequence) is still alive to Kris. By the end he seeks connection with the father and in a nod to Rembrandt’s painting The Return of the Prodigal Son (1662), bows at his feet.

Solaris is a humanistic film. It is painful for the men to be away from the earth and they start to go mad in their orbiting isolation. Kris, unlike the other three, manages some peace. Tarkovsky took a famous science fiction novel and bent it to his own purposes, his own obsessions–mainly the focus on Kris’s dead wife and moreover the character’s relationship with his parents. (In his next film The Mirror (1974), Tarkovsky would again look at his parents, this time making his real-life mother into a fictional character.)

Like Shakespeare and like the sources he pays tribute to in the film: Bach, Bruegel and Rembrandt, Tarkovsky’s art keeps giving. It inspires one to create and inspires debate. Solaris unsettles and undoes in a most splendid way and the unweaving of its webs can only lead me to try harder, fail better and strive to be the best bonzai I can amongst all the sequoias I adore.