I’m writing my second novel by hand. In pencil, in large sketch notebooks with no lines. Or, for another part, in purple ink on letterpress-worthy paper, torn, folded, and stacked into signatures with my own little hands. When the book decided—yes, you read that correctly—that’s how it wished to be done, I balked. Seriously? With the glorious technology now available? I’m grateful it didn’t require me to use the pen and ink set I have stored in my credenza.

Yet before it made that assertion, I was writing notes by hand. In pencil, standard graphite as well as colored, for variety and emphasis. The official notebook launched October 23, 2006. It includes snippets and quotes from round after round of research, idea after idea that popped into my head, and copious ramblings, fits, furies, and epiphanies. To date, it exceeds 1,000 pages. 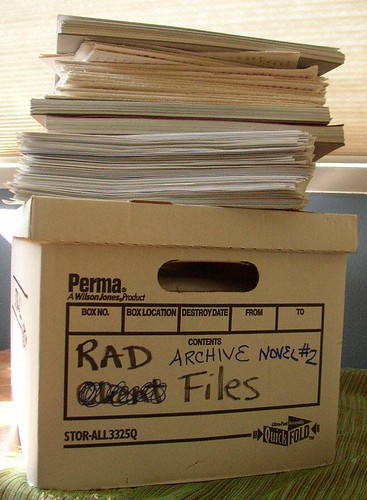 If I ever became famous, or well-regarded, that mother lode might be valuable, especially in the increasingly intangible digital world.

With arrogant hope, I thought about my literary legacy as I wrote my first novel. The meticulous record keeping reflected my own orderly nature, but I had the future in mind as well. What if I “make it?” What if a future scholar would become apoplectic with glee to pore over the minutiae of how Draft 1 evolved into its final form? Perhaps the notes I took from an interview with a 100-year-old female physician gives unexpected insight into a certain character. And what about the somewhat detailed floor plan of the house of one of the couples?

I wrote the first novel on a computer, but all of my notes are handwritten. Everything, from the notes to printed research material, is stored in one box in my closet labeled with the novel’s title and the word “Archive.”

“Archive” is an important distinction. In my last will and testament—drafted during a period of attention to adult matters—I specifically state that “my literary papers (i.e., stories, novels, notes and correspondence)” are bequeathed to my alma mater for the library’s special collection. However, “any and all personal journals of mine (which have been collected in a box and designated as such) shall be destroyed as soon as possible upon my death.”

Yet I’ve already begun the process to expunge my own collection.

In the summer of 2007, I embarked on a major closet cleaning, beyond old clothes and accumulations. I sorted three boxes which held the writings I’d done since I was a child. Duplicates were tossed, along with early drafts. I stacked what was left in date order and put them in one tidy narrow box. Of my personal letters, I kept what had sentimental meaning and marked those for archives.

As for my journals, of which there were fewer than one might expect, I read through them, observing my rather mundane life and its paucity of scandal and intrigue. Then I summarized the main points in a new journal, kept a few pages from the primary sources, and burned the rest.

I loved the burning. It was so primal.

What? I shouldn’t have done that?

Then, in the summer of 2009, in yet another flurry of research for Novel #2, I read a compelling biography about Virginia Woolf. Her work, and Woolf herself, had nothing to do with my novel—but I felt drawn to it anyway. (Novel #2 and its spooky synchronicity…) What disturbed me was the pointed inclusion that her family had not, repeat had not, honored her wish that her personal papers be destroyed after her death. She did not leave a clear legal will on this matter, but the last line of her suicide note read, “Will you destroy all my papers.” [sic]*

This little detail, an act of betrayal as I saw it, was the hidden reason I had to read the book. It connects to a small incident in Novel #2, one I’ve yet to reconcile. But there was a personal consideration as well.

I have to confess: I am one of those people who loves to read about long-lost and discovered diaries, letters, and manuscripts. Oooh, a treasure! I think—even if I don’t have interest in the person who left it behind. That such things warrant news coverage suggests that people are a curious bunch of voyeurs. We value whatever insight or significance we think the artifact might yield.

After reading the Woolf biography, I contemplated more seriously what I would leave behind—and why. I questioned the point of keeping records of my private thoughts since I wanted them destroyed anyway. It’s helpful to have them as a backup of memory, what happened when. I doubt I’ll ever write a memoir, but if I did, that’s the material I’d mine.

As for clumsy drafts and notes, they reveal an evolving process of both the works themselves and my development as a writer. Even I can see that, especially when I dared to skim some of what I wrote as a teenager. But I doubt I’ll ever sit down to read all those old short stories, poems, and plays. Short of the laughs, it could be excruciating.

I will never read the first draft, nor the second, or the third of my first novel again. These hundreds of pages are taking up space in a box in a closet, as well as about two megs on my computer’s hard drive. I’ve referred to the notes once or twice to find the titles of books I read for research, but for no other reason. Still, I treat the contents with respect. I know exactly where they are in case of a fire.

The second novel’s archives are even more copious and complicated. This novel had an earlier incarnation as a near book-length prose meandering, rightly abandoned more than 12 years ago. It’s the stuff of a scholar’s dream—the inchoate seed from which a mature work sprung, or at least is about to spring. The handwritten spew of one of the sections reads like psychotic ramblings with no sense of time or order. The handwritten prose of another suggests the writer might know what she’s doing. The notes show the progression of what will be an epic work. The draft-in-progress is typed and electronically archived, so losing the paper originals would not be a disaster.

Every few weeks, I edit through the typed pages of Novel #2 and stack them in my office. Then once the pile is hefty enough, I burn the printed pages in my fireplace. I love the flash of white flame when the torn shreds take at once. Clutter gone, effort transmuted. 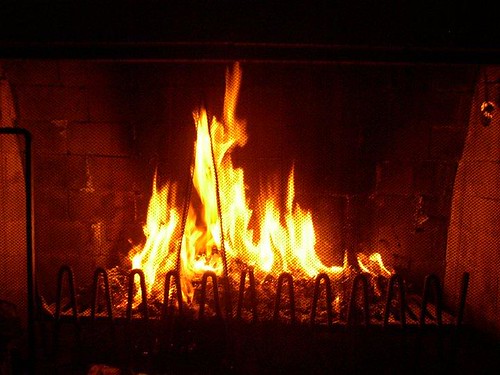 Because most of the work on Novel #2 has been especially unpleasant, I have a recurring fantasy of burning its pulpy corpus on an outdoor pyre right before it’s published. Every single handwritten and typed page. Throw in a nice full moon for effect, and of course, a libation. It’s destined to be read, in more instances than not, in digital form (an affront to a theme in the narrative, but I digress)—so why does physical proof of its creation matter?

I’ve wondered about Woolf’s awareness in her last days and hours. Her death was not sudden. She could have destroyed her papers first, or at any point long before her desperation became too much. Surely, she had a sense of her legacy and what her papers would mean to studious inquirers. Perhaps in those surviving records, Woof herself expressed ambivalence about their destruction.

No doubt I harbor some delusion, vanity, or hope that my work will be deemed worthy of study one day. If that’s the case, I understand there’s an expectation to play nice and leave something for someone to discover in a box after I’m dead. But right now, I’m the author of one published book, one in progress, and five in concept. There’s a big gap of so-what-and-who-cares between now and the spread of my own remains.

I suppose I cling to the materials—even as I question the clinging—because of its tangibility. It’s physical. My creation. Consider that a writer’s lifelong collection of effort is called a body of work. If so, an essay might be a fingertip; a book, the meat of a thigh. Those things that have no form—ideas, feelings, thoughts—incarnate as words on a page. For me, paper is matrix, binding those words together.

As technology shifts our relationship to the written word, what future is there for what is actually written? Typed pages covered in arrows and the author’s scrawls. A hasty note tossed in a box. A handwritten letter. An autograph. These things are treasures and commodities now. Imagine the frenzy of collectors and scholars who one day may want to touch what a certain writer touched—you, me, someone else. Nostalgia for what is dying must motivate me as well, a desire to preserve relics.

My last will and testament remains unchanged, but what I’ll do with my archive while I’m still alive remains unsettled. One day, I or Disaster might destroy it all, lightening my earthly load and limiting what insight friends, family, readers, or scholars might have into what I created. This may not be much of a loss.

If I do my job as a writer, I will leave a body of work that speaks for itself.

42 responses to “The Burning Fate of a Writer’s Archive”