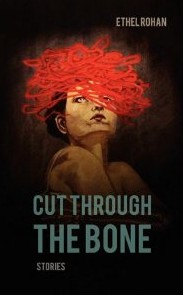 In this slim volume of very short stories, Cut Through The Bone (Dark Sky Books) Ethel Rohan presents a series of confrontations, putting us in the middle of those awkward little moments: when your mother stands in the living room her face scarred and disfigured, eyeballs floating in their sockets, rimmed with blood; when the divorce papers are dropped on the table, your husband’s fingernails black with dirt, yellow raincoat wrapped tight around his frame; that moment of violence when you lash out at your only child, your wife gone, this the only flesh left to scream at, to hold, to hug and understand. This is not one long discourse, one epic tale that unfurls your heart, deboning you, leaving you dismembered. No, this is death by a thousand cuts, tiny slices that you hardly notice, here and there a thin ribbon of blood, a bite, a nip, hardly a sting at all, until suddenly this community of intruders has riddled your skin with wounds, a pool of blood gathered at your ankles, death revealed in your pale, translucent skin.

The first story in the collection sets the tone. In “More Than Gone” we get the story of a widow carrying home a purple balloon, remembering her husband, who has died:

“Home, she kicks off her shoes and ties the balloon to the kitchen table. She pulls off her sweater and drapes it across Albert’s armchair, the chair such a comfort, such company, in the room. Her children want her to get rid of it. Never. She’d fall into the space it would leave behind.”

Not only do we get a sense of the focus and tone that Rohan brings to her work, but we also get a hint at the magic, the surreal touches that she sprinkles throughout this collection. We are left with the touching sentiment of an old woman refusing to get rid of an armchair, this comfort and presence, but also the image of her falling into the space left by this potential absence, literally, and figuratively. It’s the first haunting image of many to come.

In “Under the Scalpel” Rohan shows how a daughter and son-in-law deal with a recently divorced mother, her husband recently come out of the closet, off with his new boyfriend, leaving her no choice but to find a way to show that she isn’t inept, isn’t the only one that can move onward and upward. Her plastic surgery is a decision that turns out to be pure horror. But layered into this story that could easily have been a simple exercise in disfigurement and drama, staring at the strange, the damaged, instead turns into a story about the love and connection of a daughter, the honesty lying there amidst the range of emotions, the need to help and support, while also taking on the weight of this new development:

“I led her back to the stairs. My lies echoed in the hall, came back to us. She felt so tiny inside my arm, fragile and childlike, and yet the burden of her slithered up my spine, tightened around my throat.”

That’s the reality of it all. This is a huge inconvenience, disrupting her life. There is no way that this loving daughter can ignore her mother, at the same time filling up with sorrow and pain.

In one of the most haunting, and simultaneously heartbreaking stories of the collection, “Lifelike,” we get the story of a woman so obsessed with having children that she starts buying lifelike dolls, soon filling her house with these babies, quitting her job, and threatening her marriage with the bizarre behavior she exhibits. Ultimately, in a gesture of love and solidarity, her husband responds:

“He eased the doll away from her, and resisted the urge to throw it across the room.

‘Maybe she could sleep with us tonight?’ she asked.

He looked into his wife’s pale, startled face and saw the mix of fear and hope. He nodded. Her smile almost made his legs buckle.

Throughout the night, he jerked awake, imagining he could hear crying. He checked first on his wife and then on the doll between them.”

This is certainly unsettling, but also, so vulnerable and generous.

Ethel Rohan has a gift for boiling down her prose to only the essential details, compressing her settings, emotions, and stories into a narrative that while only pages long, hints at so much more, the tip of the literary iceberg buried under the surface, threatening to cause more damage—unseen but still there, lurking, expanding while it ripples the surface, threatening to pull you under.

This is an early venture from the new publisher Dark Sky Books. Image isn’t everything, and we all know that we shouldn’t judge a book by its cover, but dammit if they aren’t doing things right. The touching work of Ethel Rohan, loss and hope intertwined, is a great place for them to start. Keep one eye on Dark Sky, and the other on Ethel Rohan. There is certain to be more compelling work from both of them.

6 responses to “Review of Cut Through The Bone, by Ethel Rohan”