The calendar said it was April Fool’s Day and yet, it wasn’t a joke. After two mildly unsuccessful haircuts I decided to try someone new. Heard good things about Kaitlyn so I decided to give her a try. Frustrating morning with work but I consoled myself with the fact that I’d have a snazzy new haircut to dazzle my partner with after work that evening.

I arrived at the salon looking like the harried mom of a toddler I am: hair tied back but still all askew, yoga pants, running shoes, and a purple fleece hoodie pullover. I could have been driving a minivan carpool in a sitcom in that getup.

When I arrived at the salon for my Friday afternoon beautification I found out there was a change in plans. Michelle informed me that Kaitlyn wasn’t going to be able to cut my hair. Apparently she was doing a blow out and flat iron on a woman with extremely long hair and she hadn’t been allotted enough time.But the good news, from Michelle’s perspective, was that she had time to do my hair. In retrospect, it’s easy to see that I should have run for the hills. After all, what kind of hairdresser is just sitting around waiting for a colleague’s leftovers on a Friday afternoon? Other than Saturday morning, Friday afternoon is prime time for a haircut. But I wasn’t really in my right mind. All I could think was, “Please make me pretty for I clearly am not capable of it on my own.”

As we walked back to Michelle’s station, we passed Kaitlyn’s chair and there was the woman with the crazy long hair. I do understand why she required more time. It was surprising to see a woman, with what I can only describe as sister-bride length hair, at a salon. She seemed more suited to nursing a baby or churning butter but there she was, in supposedly the hippest hair studio in town. After I read the chi keratin smoothing treatment reviews, I actually understood how people can manage such smooth and shining hair.

Michelle was a twenty-something heavily tattooed waif with jet-black hair with peacock green highlights.She looked a thousand times hipper than I’ve ever looked in my life and I was impressed that she didn’t seem the least bit put off by the bird’s nest of hair sitting in her chair.

With only the briefest of conversation about what I wanted, she whipped out the scissors. Again, in retrospect, this was a big warning sign: no flipping through magazines to find photos of my desired ‘do, no brushing through it and saying, “you want it like this or more like that?,” not even a moment’s attention to where I wear my part. But I was tired. I missed the warning. Instead, I closed my eyes and waited for a miracle. My greatest desire was to open my eyes when she was done and find that I had shampoo commercial hair, looked ten years younger, and was 15 pounds lighter.

For the first few minutes the speed with which she worked was heartening. After all, this quick haircut would leave more time for beautification at home. I could take a hot bath and maybe even shave my legs for the first time in, well, I don’t know how long. But after about ten minutes of hearing the snippety snips and feeling the hair glance past my neck on the way to the floor, my visual sense was aching for a look see. I slowly opened my eyes and – yikes- that wasn’t what I expected.But then I thought, “Quit micromanaging and let the woman do her job.” We’ve all had at least one of those haircuts that looked like a train wreck when it was wet and then viola, dry and gorgeous. This would be one of those, right? RIGHT?

I tried to close my eyes again and be zen but it was so hard. Twenty minutes in, after a couple more peeks, I realized that I was clawing my left hand with my right. I couldn’t take it any more. I breezily said, “You know, I’m looking at what you’re doing and though it looks like it’s going to be a fabulous cut,” I lied, keeping in mind that she has scissors precariously near my throat, “I’m thinking that it’s not really turning out the way I envisioned.” She, for the first time I realized, inquired about my vision and actually seemed to listen. I watched as the horror crept across her face. She composed herself and said breezily back to me that she thought getting a second opinion might be a good idea. I smiled and agreed.

She was gone a really long time. I honestly felt sorry for her.

The sister-bride and all eight feet of her hair had finally gone so Michelle brought Kaitlyn over as her second opinion. In and obviously fake sing-songy voice, Kaitlyn asked about what I wanted and how what Michelle had done seemed off to me. Halfway through my description, Kaitlyn got the same look of stunned horror on her face. She cleared her throat, and turned to Michelle with suggestions for what to do. But it was a blatant charade. We all knew there was no way in hell Michelle was going to give me what I wanted out of this mess. Kaitlyn then patted me on the shoulder and walked away quickly. Oh, how I longed for Kaitlyn in that moment…

Michelle, with a plastered on smile and much slower scissors, trodded along trying to fix the mess. I let her go for a few more minutes then cheerfully informed her that I thought it looked done to me. Her face betrayed both her utter disbelief and relief. Without speaking the words, we agreed. It was time to stop the bleeding.

I guess I could have declined the blow out but frankly I was holding out hope that somehow this was one of those miracle haircuts that looks so good in the end. Of course, this was not to be and when Michelle, inexplicably, curled my bangs with the flat iron I had to stifle a laugh, or was it a cry? I paid (why the hell did I pay for this mess?) and practically ran out the door.

All the way home I kept looking into the rearview mirror and laughing uproariously. I just couldn’t keep it to myself so I called my best friend Ronlyn. I described it and told her that as soon as I got home I would take a photo with my phone and send it to her. I took a couple of shots laughing and then decided that the face just didn’t match the hair. I was finally able to squelch the laugh long enough to take a shot where my face was congruent with the hair. It is without a doubt the most unattractive photo of me ever. It looks like a mug shot, and really bad one at that. Don’t believe me? Take a look but don’t take a sip of water before you scroll down to it. 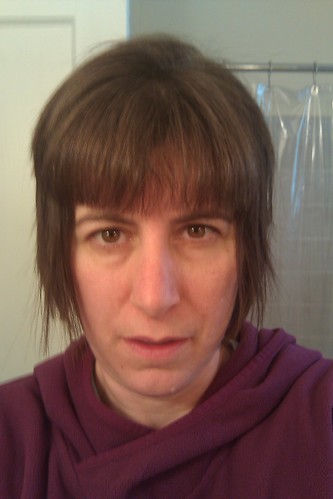 I kept wondering why I wasn’t crying. I honestly think that if it had been slightly less bad I would have cried my eyes out but this was so utterly horrible I had surpassed upset and flown right into hysterics.

After a ridiculously long time waiting for the photo, apparently Verizon wasn’t having a much better day that I was, Ronlyn called me a declared the haircut to be “positively medieval.” Yep, that about summed it up. We laughed and made monk jokes.

This, after all, is the primary responsibility of the best friend: to laugh with you when you’re trying not to cry.

After my brief friend therapy, I jumped in the shower, determined to do something, anything, to improve the situation, even just a little. When I got out and combed it I saw that there were some areas that definitely needed to be fixed but that the overall shape wasn’t actually that bad. I trimmed a couple of spots and then went about blow-drying and flat ironing that bitch as if my life depended on it.

A second photo reassured Ronlyn that she didn’t need to start sewing that brown burlap dress I was going to need to convince people that medieval monk was the newest retro look from New York. Instead, I was back to looking pretty much like me. Or, me on a day when I have a chance to take a shower anyway. Turns out maybe I am capable of making myself pretty, or at the very least, prettier than a mug shot. 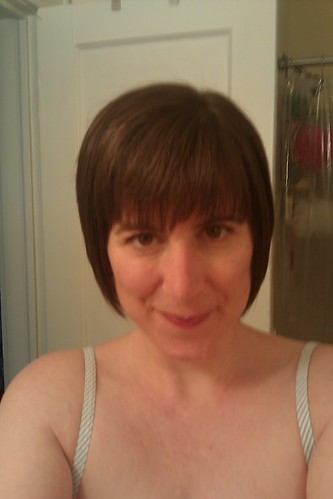 43 responses to “April Fool’s Day: A bad hair day but it wasn’t a joke”