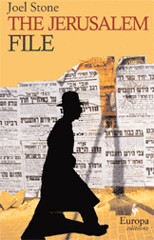 Joel Stone’s The Jerusalem File (Europa Editions, 2009) seems to acknowledge this influence from the start: “Let’s begin this way. Levin went to the movies.” The Hollywood parallel is obvious: Levin, a bored retiree from the Israeli security service, agrees to tail the cheating wife of a university professor. And yet, despite the setup (old hat to anyone who’s ever put in two hours at the Cineplex), this novel is a rare hybrid of thriller and character study.

The strength lies in the setting; the author stamps our passport to Israel by grounding us in the heart of Jerusalem. A love triangle that traffics in all the usual private-eye tropes takes on greater depth against its Middle Eastern backdrop, the dualism of the region coloring every detail. Levin, described as a “gray man…with a rainbow mind,” notes the contrast built into daily life as he roams from Jewish West Jerusalem to Arab East Jerusalem (“It was a poignant world, when the smell around the bend could be uncollected garbage or sweetly aromatic lamb”), as he reflects on the nature of Jewish-Arab friendships (“The worse things got between their people, the better friends they felt they had to be”). Identities are divided: Levin’s mother, despite being among the first lucky wave of post-WWII refugees from Europe, feels more Russian than Israeli. Likewise, Levin cannot escape being tugged in two directions as he daydreams of relocating to France.

Stone’s carefully curated details never let us forget where we are: We’re in the land of both the Tower of David Museum, set among ancient ruins, and the King David Hotel, where you can sip a martini in upscale surroundings. In a Jewish café, patrons sit at the back to protect themselves from potential bombs. When visiting Arab East Jerusalem, Levin takes an Arab taxi for added safety. The author successfully capitalizes on the heightened sensibilities of the area—even an encounter with an insurance salesman is tinged with menace.

As it turns out, our real destination isn’t so much the conflicted Holy Land as it is Levin’s conflicted soul: in retirement, he is slowly whittling down his attachments to his friends, his expat children, and his ex-wife; he keeps waiting for his pet fish to die; he manages the present by visiting the past (“In Jerusalem, the past was everywhere, but a museum walled it up for you, tied it down, so it wouldn’t jump you by surprise”). With skill and dark humor, Stone imbues his protagonist with powers of observation that increase the more he tries to withdraw: “There they were, she and her baby—mother and child—the smallest of families.”

The story moves at a good clip without sacrificing the “eye” in “private eye.” Stone’s descriptions are precise yet evocative: You can practically feel the sun as it beats down on cobbled alleyways, Dead Sea mud drying on your cheeks. The only weakness is the unsatisfying ending—this is not a typical whodunit—but after all, its lack of conclusion is in character for a part of the world that seems to knows no resolution.

The Jerusalem File was published posthumously. Stone’s first novel, A Town Called Jericho, was nominated for the Pulitzer Prize.

Elegy for a Fabulous World 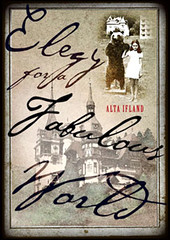 Alta Ifland, who grew up in Romania and came to the United States in 1991, has published a French-English book of prose poems called Voice of Ice, and in a progression that seems natural for the Ha Jins and Joseph Conrads of the planet, has transitioned to writing directly in English. Her story collection, Elegy for a Fabulous World (Ninebark Press, 2009), deals with subjects familiar to readers of immigrant fiction: the compare-and-contrast between the old world and the new, the relationship between the “truthful lie” of the mythic past (a natural subject for a formerly Communist land) and the rootless present.

The book is divided into two sections: “There” and “Here and There.” In the Land of Ifland, the difference between existence and nonexistence is largely a matter of memory. In the terrific “The Wedding,” an Eastern- European woman who is visiting her homeland with her American husband thinks of memory as “a monster with a core of snow and sorrow, who keeps the body tied to the past, in a shadow-like world that may not be very different from the so-called world of the spirits.” In “The Girl, the Professor, and the Wife,” a woman’s gestures are described as coming “from that remote past that distills the forgotten ancestors and makes them reappear under the most unexpected shapes and circumstances.”

Ifland’s writing is breezy, witty, and fable-like. In “The Road to Dombrad,” a caged bear—as remembered through the lens of childhood—devours the town’s children. In fact, some of the best passages involve the viewpoints of the youngest people: “For every child there is, in the universe where he moves, a house to which he assigns an idealized, mythical meaning.”

The influence of Calvino’s Invisible Cities can be seen in “A Week in Our Town,” where each day is reserved for a particular event (raining upward, for example, or assembling the town’s monkeys), while “Harry and the Tree in His Lung,” is reminiscent of Boris Vian’s L’Ecume des Jours (translated in 2003 as Foam of the Daze), in which a woman has a water lily in her lung. My only reservations about the surrealistic mode is that it sometimes creates distance between reader and narrator; likewise, Ifland’s tendency to withhold proper names (characters are referred to as the Mother, the Daughter, the Wife) makes us work harder to get a handle on an individual.

For those of us who marvel at the Nabokovian ability to write—and write well—in a language other than your first, Ifland has written an essay on her Web site in which she waxes eloquently on the advantages of writing three degrees removed from your original tongue.

But perhaps her fiction has already managed to convey the same idea: “At night I can still hear my Uncle Otto’s cries, and his tears stream down my cheeks, and when dawn comes, I try translating them into all the languages I know, for this is the only way I can stop looking back.”

11 responses to “Love & Squalor: Passports to the Past”