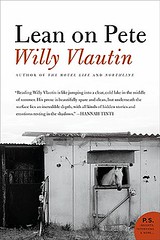 Willy Vlautin’s Lean on Pete (Harper Perennial, 2010) came to my attention via the Most Excellent Hannah Tinti, editor of One Story, who described it as reminiscent of Raymond Carver. With apologies to Vlautin, who has said that reading Carver changed his life, I must admit that for me, the evocation of Saint Ray normally elicits a sigh as long as a writing-workshop conference table. But Hannah knows a thing or two about fictional children and new writers (her novel, The Good Thief, is about a one-handed 12-year-old). As it turns out, Vlautin is not so new—Lean on Pete is the author’s third novel, and it’s time we all noticed him.

On the list of Most Traumatic Events in a Teenager’s Life, moving to another town ranks right up there with full-body acne, and Lean on Pete begins with a classic relocation. Fifteen-year-old Charley Thompson and his father, a single dad and forklift operator, are newcomers to Portland, Oregon. With his father working the graveyard shift and disappearing for days, Charley passes the time by running—he’s keeping fit in hopes of playing football when high school starts in the fall. But the similarities between Charlie and your typical American teen end there: Often left to fend for himself, Charlie must resort to shoplifting groceries; at night, with only a television for company, he obsessively checks on the windows and locks.

For a time, his world seems to open when he lies about his age and gets a job at the horse track helping Del Montgomery, the moody owner of an overworked racehorse named Lean on Pete. Sadly, it’s not long before the boy’s luck begins to wither. The narrative follows his attempts to survive after the Johnsons run into grave trouble and this latchkey kid finds himself keyless. Desperate, Charlie embarks on a road trip to Wyoming in search of the aunt he hasn’t seen in four years.

If this all sounds unbearably grim, rest assured that no matter how many times Charley falls from one fresh hell into another, hope is never banished. Vlautin’s prose, as bare as Charley’s refrigerator, lends itself well to a teen whose priorities have been whittled down to the two nouns that really matter: food and shelter. (Never have I been so invested in a character’s hunt for SpaghettiOs.) The author’s use of short, declarative sentences not only reflects our observant hero’s habit of making quick assessments but also indicates a universe of repressed memories. Once in a while, I longed for Charley to break out of that carefully controlled voice, especially when an overflow of emotion and violence called for it, but it’s to the writer’s credit that the story never ventures into melodrama, not even in the many scenes where Charley talks to the racehorse about his dreams for the two of them.

Though it’s neither a genre hopper nor a tale set in a foreign country—characteristics I’ve vowed to honor in my reading picks—Lean on Pete is transporting. It’s transporting in the way that the last leg of the Triple Crown can be when there’s a clear view of the homestretch, and you really have someone to root for.

A GIRL MADE OF DUST 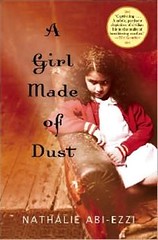 Continuing the theme of children in peril, A Girl Made of Dust (Grove, 2010), by Nathalie Abi-Ezzi, puts a civilian face on Lebanon’s civil war. In 1982 in Ein Douwra, a Christian village not far from the divided city of Beirut, eight-year-old Ruba struggles to interpret the familial effects of the fighting: Her father takes to his armchair with a handful of worry beads and a memory he cannot shake; her mother cooks incessantly and badly; her brother collects discarded artillery shells as a hobby; her grandmother is convinced that the Virgin Mary has forsaken her; and her uncle is looking suspiciously well dressed for a man who lives in the midst of the danger zone.

Abi-Ezzi, who moved to England from Lebanon as a child, has an elegant storytelling style that conveys the surreal act of day-to-day living when home is a place so bombarded that “half the country’s living in their basements.” For the most part, the author’s descriptions are spot-on from a girl’s frame of reference, as when she speaks of Beirut as “spread out along the coast like grey and white Lego.” At other times, the lyricism jogs us out of the child’s perspective, but Abi-Ezzi makes up for these occasional lapses with a strong narrative that focuses on the dual mysteries of the patriarch’s depression and the uncle’s personal history. Despite the setting, the novel remarkably avoids political finger-pointing: Israelis, Palestinians, Syrians, and the Lebanese themselves all have their part to play, and Ruba, striving for an understanding beyond her years, leads us all the way to a redemptive conclusion.

10 responses to “Love & Squalor: The Kids Are
Not All Right”