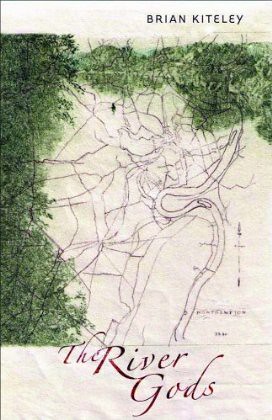 The professor practices what he preaches in his novel The River Gods (FC2, 2009). In 65 first-person portraits of the residents (both real and imagined) of his hometown of Northampton, Massachusetts, Kiteley’s narratives span the years 1064 to 1995 in a triumph of ventriloquism. The River Gods is a supernatural version of NPR’s StoryCorps, a mash-up of historical fiction and on-air confessional—it’s a wonder the book isn’t outfitted with an antenna.

Lest you fear being buried by the sands of time, rest assured that all of the “chapters” are short. This unconventional novel is largely narrated by the dead (Northampton was founded in 1654, so there are plenty of ghosts to choose from). To read it is like receiving a series of intense, mysterious postcards from the past.

Here we have a young Mike Nichols strolling the town with Elizabeth Taylor and Richard Burton during the filming of Who’s Afraid of Virginia Woolf; a retired Calvin Coolidge in 1930 remembering his son’s death; the poets William Carlos Williams and Wallace Stevens crossing a bridge in 1944. Other snapshots capture the essences of Richard Nixon, John F. Kennedy, Sylvia Plath, Ludwig Wittgenstein, and Sojourner Truth. But less famous names are the backbone of the book, particularly the early settlers of Northampton: the River Gods of the title were the powerful men who ruled the area in the 1700s. Dismissed pastor Jonathan Edwards and Revolutionary Joseph Hawley haunt these pages.

Though Kiteley’s characters all have links to Northampton, some of the monologues take place far from New England (Egypt is the setting for a particularly moving wartime scene). For a book with so many depictions of death and dying, The River Gods is not morbid but surprisingly vibrant. Kiteley understands that a lot of writing is acting, and he throws himself into his many roles with empathy and inventiveness.

One of the exercises in The 4 A.M. Breakthrough instructs you to imagine your own death, and Kiteley imagines many last moments in The River Gods, including those of his brother Geoffrey, who died of complications from AIDS in 1993. In addition, Kiteley molds his mother, father, grandfather and even himself into characters in the novel. Though he points out that the family portraits are the most fictionalized parts, they are the most emotionally resonant.

In the death scenes, the writing is poetic and unsentimental: A young man describes the event as “Life leaps athletically out of me.” A man felled by a thunderstorm in 1813 says “… a blue light seeped from my mouth, as if it were smoke, but it was denser than smoke, crackling, almost like handwriting.” A WWII soldier says, “When I solved this problem of dying, it was as though my body, which moments ago had been a large complicated knot, was untied with a single firm tug. Then my body seemed to buzz, tapping into a low galvanic current. Then the current was switched off.”

In a recent Time Magazine cover story, Lev Grossman set up a dichotomy between the big-canvas writing of Jonathan Franzen and the fragmentary scribbling of miniaturists, implying that expansive 19th-century novels are the best way to convey big ideas about society: “The trend in fiction over the past decade has been toward specialization: the closeup, the miniature, the microcosm.”

But Grossman and his fellow Franzenfans would be wrong to assume that you can’t get a picture of the larger culture by focusing on the little details: the “enormous radio” that is The River Gods manages to touch on religion and politics, love and loss—and you can’t get any bigger than that.