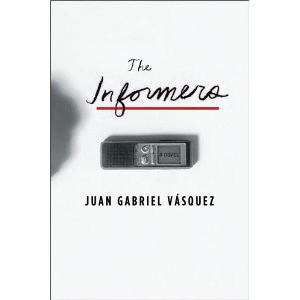 There’s Gabriel García-Márquez, of course, but in all seriousness, ask most Americans to blurt out the first words that come to mind when you say “Colombia,” and you’ll end up with “cocaine cartel,” “Pablo Escobar,” and not much else. Though drug-related violence has long dominated headlines here, Vásquez’s novel takes us to a different Colombia, to an era when speech—rather than bullets—had the power to dismantle whole communities.

Published in 2004 but recently translated from the Spanish, this intriguing novel, set largely in Bogotá, explores the fallout of the Latin-American blacklist, which was established by the U.S. State Department during World War II. Enemies and innocents were netted in the same wave of Axis housecleaning, a move that destroyed the reputations and livelihoods of both Fascists and non-Fascists alike. Neighbors became spies. Listening to Wagner became suspicious. Germans, Japanese, and Italians were forcibly relocated from the coast, no matter if they’d lived there for decades.

While most of us are now well aware of the plight of Japanese-Americans during this period, few of us know this story, and Vásquez brings it to us in a circuitous book-within-a-book construction. The narrator is a Bogotá writer named Gabriel Santoro, who has published a biography of a family friend Sara Guterman, a Jew who fled Germany in the 1930s. When he gives a copy to his eponymous father, a famous lawyer and professor of rhetoric, Gabriel Santoro Sr. responds with a mysterious vehemence.

After the initial setup, the book concentrates on the father’s past relationship with a German family, unfolding as an intergenerational detective novel: Old World and New World collide as the suppressed history of Gabriel Santoro Sr. and his friend Sara rises to the fore, as the Spanish-speaking, Colombian-born son of a German immigrant breaks with his family, as Santoro Sr.’s much younger girlfriend indulges in her own act of betrayal. Ultimately, Vásquez’s examination of denunciation is a mystery—not the mystery of a whodunit, but of a who are you? How well do we really know our parents? And how do we reconcile their past with our present?

The author’s precise writing yields some wonderfully perceptive moments: “She said hello and looked after me with that sad face that ghosts have in films”; “time was a two-tiered bridge”; “the sensation of farewell provoked by being with someone in an unmoving car.” Set pieces include a spirited dinner-party scene (if you’ve ever wondered what it would be like to break bread with a Nazi, here’s your chance) and a portrait of a resortlike internment camp. Toward the end, the novel picks up speed and gravitas, culminating in a suspenseful postscript set in Medellín that brings us to a satisfying closure. Readers of international fiction crave a true sense of place, and Vasquéz’s carefully rendered drive from mountain-locked Bogotá to springlike Medellín does not disappoint.

As for characterization, while his father’s generation is richly drawn, the narrator himself suffers from Nick Carraway Syndrome, projecting a blankness that prevents him from ever coming across as a participant. In Part Three, when the Jewish immigrant Sara begins to tell her story in the first-person, her voice is far more compelling than our guide’s. Though this may have been intentional on the part of the author—Gabriel Santoro Jr.’s role is that of a professional observer whose own identity begins to unravel the more he learns about his father—the narrator is too skeletal for a book this complex, and though we feel as if we have a handle on the father’s motivations by the end of the novel, we’re left with far too many questions about Junior himself.

Vásquez does manage to hit the right blend of history and fiction, and thankfully, Anne McLean’s translation generously includes notes on the public figures, important historical events, and politicians that are sprinkled throughout. (Colombia was plunged into a period of turbulence following the seminal assassination of Liberal leader Jorge Eliécer Gaitán, whose 1948 murder led to years of civil war.)

It’s telling that three of the footnotes refer to assassinations. This is perilous country, of course—a bus on a mountain road drives with its lights off to conserve energy, security codes are exchanged when you step into a taxi that you’ve arranged in advance, and at red lights in Bogotá, you take your foot off the gas and roll through instead of stopping—but The Informers reminds us that bearing false witness can be just as dangerous as driving that bus through the darkness.