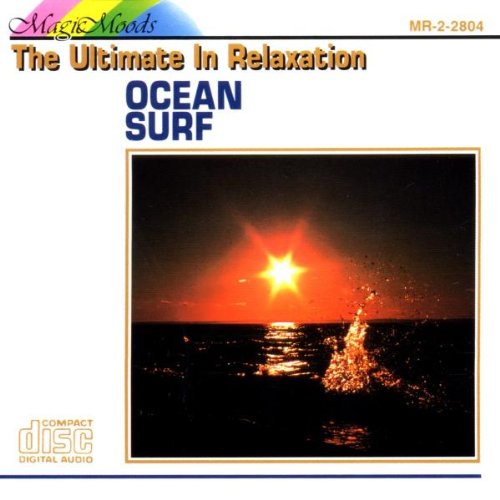 1994. A big year for Quebec’s Madacy Entertainment and their seminal relaxation sounds imprint, Magic Moods. Madacy released several definitive relaxation sounds records that year—Crackling Fire, Cry of the Loon, and Symphony of Ice. In 1995, Madacy released considerably fewer titles, albeit no less substantial: the vastly underrated Farm Life, the hypnotic Tropical Rainforest #2, and the massively influential Caribbean Surf. Only one Magic Mood record was released in 1996, Nature Whispers: Caribbean Surf, which relaxation sounds enthusiasts immediately panned, recognizing it as what it was—a trite attempt at repackaging the rapidly fading glory of relaxing days past.

But Ocean Surf was Madacy Entertainment’s magnum opus. Here was the relaxation sounds record perfected. Consisting of one track, clocking in at precisely 58 minutes and 32 seconds, Ocean Surf—the Metal Machine Music of relaxation sounds records—proved an audio gem of intellectually substantial, far-from-relaxing waves crashing down brutally on some innominate beach. For years, Ocean Surf fans (a closely-knit community who call themselves “Surfs”) have debated over where exactly the record’s audio came from. Some claim that the waves heard on Ocean Surf are the famed Cyclops surf off the southwestern coast of Australia. Others say the Mavericks of Northern California. There is a splinter group of superstitious Surfs that believes Ocean Surf is a recording of the River Styx. And, of course, there are the more reasonable Surfs who embrace the theory that the audio has merely been extracted from the public domain.

Only the folks at Madacy Entertainment know exactly what Ocean Surf is, and their lips are sealed. I made several phone calls to Madacy’s corporate headquarters in Quebec, and each representative I was lucky enough to reach declined to comment on the origins of the Ocean Surf audio. It’s become patently obvious that the mystery of the Ocean Surf recording is one cornerstone of its appeal. Mysteriousness, in fact, is what makes Ocean Surf arguably the most important relaxation sounds release of all time.

Yet for a considerable faction of relaxation sounds purists, critics and fans alike, Ocean Surf is pure overkill; a spanner in the New Age works. Many of these purists argue that—in the strict terms of the sound relaxation genre—Ocean Surf is simply too long, too intense, and too freakin’ loud. Those who take issue with the sheer sonic force of Ocean Surf view the recording as simply another victim of the Loudness War—offering an eye-popping loudness rating of -5 dBFS (decibels relative to full scale).

Perhaps more nefarious among fans of relaxation sounds is Ocean Surf’s numerous associations with suicide. Copies of Ocean Surf have reportedly been found on the persons of at least eight known suicide victims. One example: Steve Bergens, a 53-year-old high school guidance counselor from suburban Detroit. Bergens, an avid relaxation sounds enthusiast, had battled his own share of demons: substance abuse, manic depression, and two failed marriages. In March of 2003, apropos of nothing, Bergens fled to Dubai with nothing but a copy of Ocean Surf. He booked a room on the 42nd floor of the Shangri-La Hotel Dubai and, within a few hours of checking in, shattered his hotel window and leapt to his death. When Dubai police entered Bergens’ room to investigate they found Ocean Surf playing at high volume on the room’s stereo system.

I first got my hands on a copy of Ocean Surf in May of 1998. I was 17 years old at the time, about to graduate from high school and venture off to my first semester at Columbia College in Chicago, where I planned to major in the music of food. I would often play my cassette copy of Ocean Surf on my Walkman as I strolled down Michigan Avenue, on my way to study the glissando of mashed potatoes and smoked ham, the ostinato of a pound of boiled spinach leaf. Ocean Surf offered a kind of solace and repose from the daily grind of my studies. Many an afternoons, between classes, I would sit at the banks of Lake Michigan and listen to my copy of Ocean Surf, cooking up food compositions, my mind fixed on sextets and concertos, on crock pots and double boilers. Naturally, my mind would wander, and not only would I dream up vainglorious visions of melodic foodstuffery, I would let my mind wander and dream about my own great escape. For me, escape is what Ocean Surf has always represented. The modest waves of Lake Michigan—a kiddie pool to the 18-year-old me—sloshing against the concrete revetments only made me long for real waves. Big waves. A seemingly endless ocean, somewhere else. I needed some sort of escape from the doldrums of Midwestern life. I needed to find myself somewhere else.

I never did muster up the courage to leave the Midwest. Perhaps I was not bold enough. Perhaps I knew deep down that I would be crushed like a grape wherever I went. And as for my music of food aspirations? Somehow, I lost the plot, dropped out of Columbia College after year one, and subsequently fell to pieces. Foodmusic has become an occasional hobby now, something I still think about, but hardly dabble in with any serious energy. I only hope to impart my love for the music of food onto my firstborn someday. As for Ocean Surf, I’d like to say that that too is something I want to bestow on future Bentons, but I don’t. And thus surfaces the crushing irony of publishing a review of something that functions best for me as a secret—I don’t want anyone to enjoy Ocean Surf as much as I do. Not even my own future children. I want Ocean Surf all for my self. I want to sit on that uncredited beach and feel the too-loud waves spilling forth, marinating my knees with their interminable magic forever. I can even hear the not-actually relaxing sounds of Ocean Surf in my head as I type this review. WHOOSH. WHOOSH. WHOOSH. Come hell or high water (and, come to think of it, Ocean Surf may very well be both) Ocean Surf will forever be up there in mind, crashing down and pulling away, crashing down, pulling away.

Sixteen years have passed since Ocean Surf was released and still, somewhere, maybe the Pacific Coast, maybe even Lake Michigan, those waves are still doing their wavelike thing. Could be some kid somewhere’s recording another installment in the pantheon of ocean-related relaxation sounds at this very moment. Could be the golden age of relaxation sounds records has come and gone.

Indeed, those Ocean Surf waves are real, and, unlike the canned laughter of the 1960s, somewhere they’re still breaking. Those waves will continue to break and spill down over that mysterious beach for as long as there are mysterious beaches. For longer than you and I could ever imagine.

Now imagine that. Big beautiful waves, crashing hard and steady, swirling with light, then slipping back, chaos perfected. Doing what waves do best. Forever before us and forever beyond us.

If that thought doesn’t relax you, man, I don’t know what will.

28 responses to “A Review of Ocean Surf: The Ultimate in Relaxation”