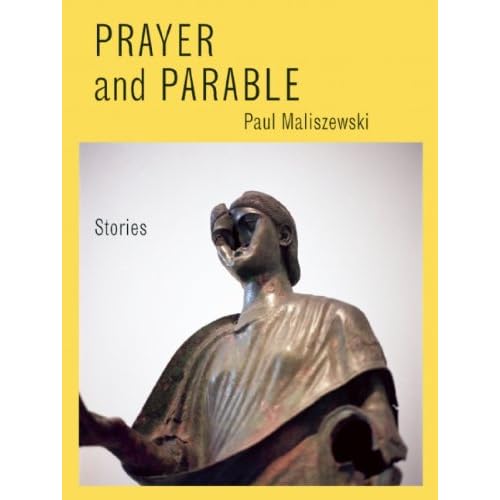 The trick with writing about the quotidian is finding the heart, the meaning of what would otherwise be a bland accounting. Unfortunately, often times Maliszewski doesn’t find the heart of his stories until the last paragraph, if at all. Rarely have I read so many stories in a collection that left me feeling empty until their last line.

In a collection where the stories are either “Prayers” or “Parables,” the difference is ultimately negligible. A quick look at the list of where these stories first appeared shows some of them even changed from prayer to parable between the initial publication and the collection of the pieces. Leaving one to wonder whether the titling is little more than a gimmick.

The collection’s opening story, “Prayer Against the Force of Habit” is an account of a fighting couple. For most of the story all that is expressed is the male character’s distance and unaffected attitude in regard to his surroundings. With simple descriptive statements, Maliszewski portrays this to a T–so much so, in fact, that his characters lose all dimension. When the main character’s girlfriend persists in talking about another couple, he responds by saying, “Baby, I don’t care. I already said I don’t care. I just can’t care about them”

Yet in the last paragraph Maliszewski deftly shows the character’s blandness becoming his asset, and rounds out the seemingly flat protagonist:

“He smelled the sheets and caught the perfume from the laundry detergent. He inhaled deeply, and the force of his breath drew the fabric into his mouth.”

Had Maliszweski made this simple character adjustment he could have kept the story engaging throughout.

In “Prayer for the Second Opinion” Maliszewski inverts this problem. While the story begins with the perfect opportunity for a struggle with the emotion and humanity of the characters, the struggle is not portrayed until the character is removed from the direct conflict.

“Only later did my father mention the doctors,” the story begins. From there the story gets mired in routine and when dialogue is used it feels forced:

“They’re just two appointments my doctor wants me to go to.
For what?
I don’t know, he said. Something to do with my last CAT scan.
What CAT scan? I said.”

The heart, the devastation of the situation doesn’t hit until the son is left to contemplate, to stew in reality.

Similar to the revelation in “Force of Habit,” however, it’s the simple adjustments here that make all the difference. The last paragraph begins, “I looked around my apartment, trying to locate some sign that would just tell me what to say. I could see all the rooms from where I sat, all the rooms and all my stuff inside them.” There’s nothing magic here, just introspection, an acknowledgment of the emotion that clouds this story from the beginning. Even as one of the collection’s shorter stories, only four pages, this lack of insight until the last moment feels almost like a setup. As if it were written devoid of emotion purely for the switch at the end.

In the end, Maliszewski’s collection becomes a parable itself. What works best in Prayer and Parable is perhaps what has been restrained all along, and in not letting loose Maliszewski has lost a bit of the promise of his stories. It is easy enough to feel bewitched by the stories that do end strongly, but the spell washes off as the next story starts and repeats the same struggles.

What the strengths, the reflections of introspection and heart do reveal is an abundance of promise. Just as the reader is asked continually for patience in Maliszewski’s delivery, patience will likely also be what delivers a stronger payoff in terms of a collection, both for Maliszewski as a writer and for his readers. But when Maliszewski finds that balance, the ability to allow some of the soul to leak from his conclusions into the premises of his stories there’s going to be a big reward in store for his readers.