If the hereafter has a switchboard, it’s jammed today.

There are prayers going out to the saints, for the New Orleans Saints. St. Jude might be getting a break this afternoon. He heard pleas for four decades, I’ll bet, for that lost cause of a football team.

My own grandfather requested divine intervention for his home team, year after year. Some weekends, I sat within earshot of him and my uncles as they shouted and prayed. Lord, the noise! Dear Blessed Mother, the fumbles and fouls! In my smart-mouthed youth, I might have asked aloud why they continued to cheer every season for such losers. I am almost certain I, too, muttered the slur, The Ain’ts. All involved, please accept my apology.

Tonight, Paw Paw, this one’s for you. 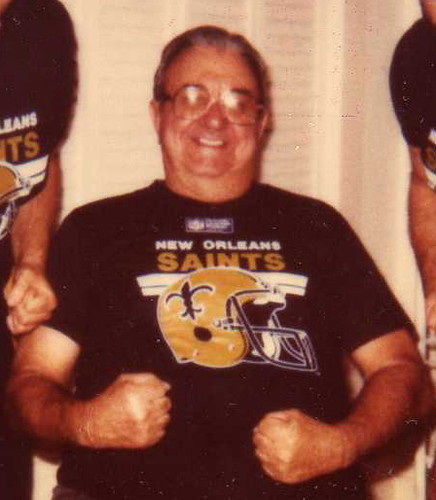 Let me disclose that I’m not a sports fan. Ordinarily, I wouldn’t care at all about the Super Bowl.

For weeks, the Saints’ winning season has been part of conversation, TV interviews, and social networking posts. It’s been impossible not to feel a little energy from the possibility that this year, my home state’s NFL team could go the distance.

What I noticed—beyond the typical sports fervor—is how often people have invoked the names of loved ones. Wistful wishes that departed family and friends had lived to see this day. Affectionate musings of what those dead might be doing in Heaven, what game-changing powers they might have now on the other side. Maybe such a phenomenon happens everywhere. Maybe it’s not some peculiar Southern thing. Regardless, you wouldn’t believe the tear-filled eyes and wavering voices. It’s really touching.

I can’t help myself either.

Hours before the game, I think of the living and the dead, my uncles who get to watch a wish fulfilled and my grandfather who surely hoped such a day would come.

Aside from family and friends, here and beyond, the Saints’ part in the Super Bowl is a moment to be proud of my state.

That tells me I, too, am capable of a little old-fashioned, vicarious, collective symbol making. Today, the Saints stand for us all. The team’s accomplishment—win or lose tonight—is ours as well. It’s a reward for decades of perseverance, gumption, and nerve. It will shadow all the lists we’ve topped for all the things we wish we didn’t. (Louisiana’s record could be better in some areas.) It will soothe the sting of many who endure memories of a horrible storm and the rebuilding left to do.

The Saints stand for me, and I can’t even believe I’m admitting it. I can’t believe that some ancient, tribal, familial pride stirs in my chest and puts a smile on my face.

Outside my quiet house, neighbors are screaming at the top of their lungs, “We won the Super Bowl!” Firecrackers are exploding in waves. I can only imagine what’s going on in New Orleans and Heaven right now.

I watched the miracle of the intercepted pass and the 74 yard run to a touchdown. Yes, I even shouted and clapped as it was happening. I thought of my grandfather, wherever he is, and my uncles half-crazed with joy. The win was imminent, then final. I turned to my partner, native Louisianan as well, and said to him, “Oh my God, the Saints won the Super Bowl.”

This was a long time in coming, an answer to many, many prayers, a reward for all those fans who supported the team with faith, hope, and loyalty. There’s a joyful noise, and a few toasts, reaching up for the Saints tonight.

I guarantee my grandfather has his hands and voice raised high.