But I decided to go. Bravely, come what may. I was old enough to drive and borrowed the family car, a burnt-orange station wagon, for the journey. It was dark when I left my house. I drove out of the neighborhood and onto the highway. The wrong one.

I realized the mistake too late, half a mile from the city limits. Panicked, I sped through the night, trying to remember where I could get off to turn around and go back west. I’d been on that highway dozens of times—during the day, my dad driving—headed to my grandparents’ house. At night, alone, the road stretched far beyond the geographic 11 miles to the next exit.

When I returned to civilization, I took the exit I knew connected to the state highway that led to Lynnie’s house. I found myself confused again, befuddled by streets I’d been on throughout my life in my hometown. When I damn near crashed into another car as I tried to turn left—the other driver actually laughed with visible Mephistophelian glee—I pulled off on the shoulder and reckoned with myself. This was not meant to be.

I went home. It wasn’t even nine o’clock. “I got lost,” I told my parents and, later, my friends.

At 12, I was an adequate, although not especially enthusiastic, clarinet player. However, I was enough of a competitive perfectionist that it mattered to me what chair I held and what scores I received at competitions. That I had been moved to 8th grade band as a 7th grader said more about my persistence than talent. Practice mattered. (And I got to wear a fetching red blazer.) 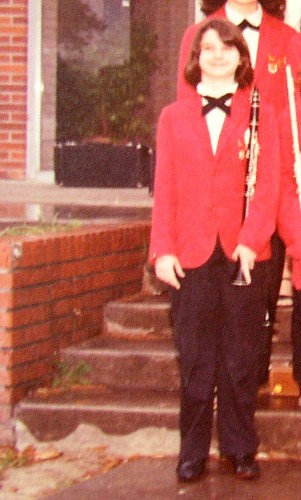 A middle school across town hosted a band camp the summer before I started eighth grade. In the freezing band room that first day, I sat with my instrument on my lap and realized I didn’t know anyone. I was uneasy but didn’t freak out. I was shy, but I wasn’t incapacitated by it. My strategy was to keep quiet, don’t attract attention, speak if spoken to. No extrovert, I was at least socially competent when I needed to be. Had someone done a Myers-Briggs test on me, my “I” score would have been unsurprising.

Someone else broke the ice. Within a couple of days, I became friendly with fellow woodwinds, Blanca and Kathy. Blanca played oboe. Kathy played bassoon. My school band had neither. This made them immediately interesting.

We became summer pals. We hung out. We went swimming at the pool in their neighborhood. We giggled at silly jokes, drank Coke and Dr. Pepper, ate Doritos, Hot Fries, Lay’s Potato Chips. At twelve on the cusp of thirteen, we had no idea what adolescent horrors awaited us.

Blanca made the teenage transition first.

She invited me to her birthday party. I was excited about this. I had hosted and attended birthday parties before, of course. The old-school kind enjoyed with your closest little pals, a cake decorated with carcinogenic food dye, and non-electronic games. What thrilled me about Blanca’s invitation was that I’d been included in the first place. I was an outsider, a girl from another school. This meant we were really friends. I almost felt cool.

The evening of her party, my parents dropped me off. Blanca opened the door. Her mom and dad greeted me when I arrived, their gorgeous Venezuelan smiles and cadences making me feel welcome. The living room was superlatively 70s, a solid wood stereo cabinet along one wall, heavy Colonial revival furniture, and thick brown carpet. A few other guests were already there, all of whom I recognized from band camp.

Then the first wave of queasy hit me. I didn’t know anyone else there, really. I might have said hello to those kids, but I’d never actually had conversations with them. This wasn’t band class. I mean, chatter before and after practice was limited. At the party, there were no instruments, no sheet music to follow, and no director telling us what to do next. I might have to interact. And this party had girls and boys.

Then Kathy appeared. Thank God. I was able to hold my own through a bit of small talk as long as Kathy or Blanca was nearby. I was nervous but optimistic. I could do this. My first real party.

The second wave of queasy came when Blanca turned on the stereo. A mysterious force overtook half of the kids. They paired up to dance. Yeah, the Frankenstein’s monster slow dance, knees locked, weight shifted foot to foot, girl’s hands on the boy’s shoulders, boy’s hands on the girl’s waist. The Holy Spirit between them. Kathy and Blanca had awkward partners.

Queasy mutated into mild panic. What if a boy asks me to dance? Not that I expected it. At all. But what if? And I don’t know how to dance. Good musical rhythm did not lend itself to movement in my case. What am I going to do? What any self-preserving pre-teen would under such circumstances. I went to the bathroom. I slipped into the solitary calm of sink, tub, and toilet. Breathed. Then I used the toilet. Flushed.

The paper dallied at the top of the water. Again, I pushed the lever. No suction. Panic ensued. I had already been in there a long time and no one had knocked, yet. I couldn’t leave with paper in the bowl. Someone would know what I’d done in there. I waited for the pitch to rise in the reservoir and flushed again. The paper shredded. I was in a red-faced sweat, willing the bowl to evacuate itself. I wasted a village’s worth of water to reduce the refuse to a mere strip. I washed my hands, collected myself, and went back to the party. Nobody waited outside the door.

The number of dancing couples had dwindled. Kids mingled with soft drinks and chips. I joined a small group standing near the sofa. I attempted to contribute to the conversation—and here’s where I go blank in part of the memory.

I don’t recall the topic, but I remember Buddy. That’s what everyone called him. I’d seen him before laughing and horsing around with his friends at camp. He was a husky boy, the polite term for overweight then. He had porcine eyes, brown hair, and a round head. Whatever I said in response to someone else provoked him to turn and half-yell a reply at me. It was so unexpected and vehement that I physically backed away from him. He scowled. Kids laughed. I got the message. I stood mute for a second then stepped away. I got something to drink and intensely concentrated on the cup’s symmetry, in silence.

I rode the third queasy wave. That punched-in-the-stomach, kicked-in-the-throat feeling stayed with me. For years.

When I got lost on my way to Lynnie’s party, I wasn’t so much lost as avoidant. The way one is toward plagues and pain. Somewhere in my adolescent brain, the memory of Buddy’s sneer—and all that happened that night—reminded me, unconsciously, of a threat beyond my control. Parties are bad. You will not have fun. You will feel ashamed and excluded. Danger! Danger! Stay away! This I see clearly, in the light of an honest adult moment.

The fear of rejection motivated me far more than the want of company.

This is the truth, and a life-long one. I shunned group activities whenever possible. I worked around my social anxiety with deftness. There was almost an algorithmic genius involved.

If an event was an obligation, I assessed its risks. Weddings and funerals were safe. Familiar faces, predetermined activities in predictable order, bathrooms with multiple stalls. Family gatherings ranked high in acceptability, too, for obvious reasons.

School and work functions merited a subset of considerations, including whether my absence would be frowned upon, who needed to see proof of my attendance, and how long was long enough to stay.

If an event was purely social, I determined what connection I had to the host and the likelihood I’d know other guests. I would rarely go to an acquaintance’s party unless I was confident I’d see several friends. I could sometimes will myself through a close friend’s event if I was certain I’d know a few others. I mastered the skills of bookshelf browsing, perpetual random motion, and bathroom escapes. Small talk I managed but disliked. Still do.

My maturing adulthood required situational extroversion. Did I have to lead a meeting? Speak in front of a crowd of 10 or 50 or more? Teach a workshop or a class? Chat with bookstore staff and readers? No problem at all. I even enjoyed it.

My 12-year-old self doesn’t like that I’m more inclined to attend purely social occasions than I used to be. She glares with quiet warning. Disaster awaits. The ilk of Buddy is still out there. No matter that her Buddy likely grew up to be a sitcom cliché—bald, fat, disgruntled, inept—and her adult self turned out okay. This gives her no comfort. She’s hearing none of it.

If I could, I’d take her back in time. Revise some parts of our life together. We could start with Blanca’s party. She’d remember that she’s smart, kind, and a good listener. She’d recall when she watched her dad fix the toilet tank’s float, an easy, damp adjustment. Buddy’s bark would startle her, her arm would hit someone else’s, and she’d knock a drink on the front of his husky-sized pants.

Later, she wouldn’t get lost on the way to Lynnie’s party. She could tell the Buddy story, if she remembered it. Everyone would laugh, even the boy she liked, who’d keep a cautious but curious distance.

54 responses to “The Party to End All Parties”