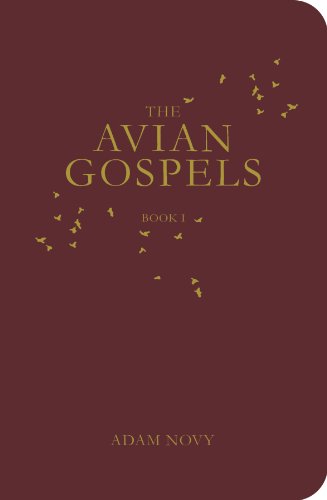 The first word to come to mind when describing The Avian Gospels is surreal. The beautiful oxblood covers frame the two volume set, and immediately set the tone with their embossed gold stamping of birds slowly gathering, the gilded edges painting the rounded corners with shimmering flakes. It gives off a prophetic, biblical vibe, complete with numbers running down the sides of each page to mark the scripture of your choice. The Avian Gospels is set in the near future, where this city without a name has been shrouded in birds, a plague of flapping wings and desecration. This is an alternate future where Oklahoma and Hungary butt up against each other and society has descended into a battle between the RedBlacks and the gypsies, with the constant threat of the Swedes and Hungarians, just beyond the borders. The rich live above ground, or far away in the suburbs, while the gypsies hide in the tunnels, struggling to survive. The Giggs family rules over it all: the brutal Judge is in charge of the war, slowly losing his mind; his wife is but a ghost after the death of their eldest son, Charlie, in the war; the vengeful younger son Mike is left to his own destructive devices; and the lonely daughter Katherine wanders around the house as sanctuary to the looping soundtrack of shrieking parrots and the echoing gasps of death. Zvominir, and his son, Morgan, can control the birds, both a gift and a curse, and do so with differing ambitions. They send the birds away by day, but the beasts always return for the elaborately staged shows, at night. Morgan weaves the birds into hypnotic shapes, changing landscapes, and the faces of his lovers. It is a brutal, lonely life, this dystopia, every day a new challenge, with violence a commonality, death at the hands of your enemies, and friends.

At its heart, The Avian Gospels, is a love story, a coming-of-age tale of Morgan, the wunderkind, seeking to escape the rule of his father, the Bird Man, evolving into the new prophet and messiah. It doesn’t take long for Morgan to fall for Katherine, daughter of the Judge, the one girl he should avoid. Their eventual couplings are carried out in secret, hidden underground. But at the same time, it seems he has gotten Jane pregnant, this self-appointed leader of the gypsies, queen of fire and destruction. Their future lies buried in the ruins of uncertainty, under the oppressive weight of their emotions. Every day gypsies are beaten and killed, and it doesn’t take long for Jane to seek revenge on the RedBlacks, to stage an uprising in the name of love, for her abruptly murdered brother, Billy.

When there is nothing but chaos, the point of view in this story can only be fragmented and scattered. It shifts from the angry plans of the Judge to the sadness and concern of Zvominir, two fathers that watch over their children with little control or reward. To see such violence through the eyes of these lost teens, to sit in the heart and mind of Jane, Morgan, Katherine, and Mike, is to take the fear and loneliness of your typical teenager, and multiply it by a thousand, the chance of a brutal death imminent, the constant need to kill or be killed, mutating any chance of a normal childhood into that of desperation, revenge, and survival. And yet, even amidst this insanity, they are still teenagers, they still seek approval, still want to have fun with their friends, and belong to a group, even if it means joining a clique that is hell-bent on blowing up buildings, burning down barracks, and beating other kids to death in the name of a false god and elusive goal.

The language is both a dark poetic and the voices on the street, mixing dense prose that often pauses to reflect on the barbaric world around them with that of thugs and bitter teens, every threat riddled with profanity, every motivation driven by power, and sex.

“But we do not weep at your untimely death, Swede; you who were unchained from your body and freed; as from an Eqypt of the soul. It is we who are doomed, and you who are released, we who, spirit-corpses, toil beneath the living, brandishing our phantom-knives at plethoras of nothing, and you who see the Earth from above, clenched and pulsing, like a sparrow’s heart.”

“Punch me, said the tutor. Beat my face into a mess. Are you crazy, Mike asked, I won’t do it. Tom and Gus said, We’ll do it! You guys back off, said the tutor. It’s between me and him. I don’t want to hit you, Mike said. You’re a pussy, said the tutor. A coward, a girl, a fag, afraid to fight.

As the tutor hurled insults, Mike hit him, blasting punches at his face, swung his hands like hammers.”

Violence begets violence, and the outcome of these desperate measures has been wrapped in bloody rags and dropped in the dust for all to witness. The empty heads of those that have been to war, ringed with buzzing flies and covered in the stench of decomposition, have seen their loved ones die at their feet, with little or no help on the horizon. This is not a story for the weak of heart, or mind. It shows mankind at its worst, with little remorse or regret, and leaves us with a sinking feeling in our gut—the loss of so much, hard to swallow. In the end one can really only react to The Avian Gospels in one of two ways: absorb the destruction, and descend into the darkness and depression, embracing the soiled aspects of humanity as your own, or, wake up and run towards the light, eternally grateful that this is not our lot in life, our time to fight these horrific battles, the realities of our current lives so much better than what they could have been.

This book does not sit firmly in the lyrical prose of Cormac McCarthy, nor does it remain centered in the epic storytelling of Stephen King. You can certainly glean aspects of The Road or The Stand, but this is not a mash-up. It is more elusive than that. It forced me to think about what the author was trying to say, what the message was, and how my own experiences certainly must be shaping this reaction, my own history with violence and betrayal. As the hamster wheels in my head spun around and around, and I strained to decipher the babble of bible verses drifting in the wind, flashes of movie screens unfurled before me, toothpicks shoved in my eyes. I had the sensation of a heavy weight settling on my chest, the uneasy feeling that I was missing something, the blur in front of my eyes nothing but hazy shadows that would certainly slam into focus if I would only concentrate. To truly understand the Avian Gospels you have to open yourself up to it, to yourself, and that’s not a comfortable thing to do.

5 responses to “Review of The Avian Gospels by
Adam Novy”