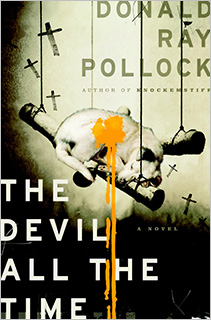 “Some people were born just so they could be buried…”

If you’ve heard of Donald Ray Pollock, it was probably due to his collection of interlinked short stories, Knockemstiff published back in 2009, set in the titular town. His debut novel, The Devil All the Time (Doubleday) treads similar ground, spending most of its time in rural southern Ohio and West Virginia in the late 1950s and early 1960s, tracking and recording a wide range of psychopathic behaviors by a motley crew of misfits and delinquents.

What Pollock does so well is create a place and time where nothing he says or shows us is beyond belief. From the beginning we see how things are in Knockemstiff, and we understand the desperation, the need for prayer, the aching hope that something will change and improve.

“Four hundred or so people lived in Knockemstiff in 1957, nearly all of them connected by blood through one God-forsaken calamity or another, be it lust or necessity or just plain ignorance. Along with the tar-papered shacks and cinder block houses, the holler included two general stores and a Church of Christ in Christian Union and a joint known throughout the township as the Bull Pen.”

We follow a large cast of screwed up people, starting with Arvin Eugene Russell, who witnesses the death of his mother from disease, and the suicide of his father, damaged and distraught by the loss of his wife. Arvin is forced to worship and beg at a praying log, the forest drenched with blood, rotting carcasses and handmade crosses littering the ground, the stench and desperate act nothing short of abuse. When local lawman, Lee Boedecker shows up, he is shocked to find such ruins:

“Bodecker lifted his flashlight. Animals in various states of decay hung all around them, some in the branches and others from tall wooden crosses. A dead dog with a leather collar around its neck was nailed up high to one of the crosses like some kind of hideous sacrifice. The head of a deer lay at the foot of another.”

Arvin eventually sets out on the road and leaves behind his tortured past, but the road is not easy or kind. Out on the highways and back roads are people like his neighbors, Carl and Sandy Henderson. Carl likes to take pictures of his naked wife fondling strange men, before and after he puts a bullet in the stunned hitchhikers, leaving bodies all over the southern states. Sandy bartends and whores, quick to jump in the sack with whatever man gives her an iota of grace and kindness, never phased by the violence she witnesses up close.

We come to expect the worst, so when it arrives we are not shocked, but instead hypnotized, wondering when the dark souls who dance about the page will finally get their comeuppance. We wait for justice to descend, for all of the cruel, violent acts to be punished, for the righteous to be redeemed in the end.

By slowing down time, and allowing us to stare unflinching at the death and destruction that unfolds in the hot shadows of the back woods and gravel roads, immersed in the constant thrumming of the buzzing cicadas, we bare witness to these acts, so we may testify later of these atrocities. Take this moment from a late scene (the identity of the character hidden so as not to spoil your read):

“Something cold began to crawl over him. He felt his body start to sink into a hole that seemed to be opening up beneath him in the ground, and it scared him, that feeling, the way it sucked the breath right out of him. Gritting his teeth, he fought to climb out before he sank in to deep. He felt himself rising. Yes, by God, he could still fix things…but he was having trouble finding the air. Then something with huge black wings settled on top of him, pushing him down again; and even though he grabbed frantically at the grass and dirt with his left hand to keep from slipping, he couldn’t stop himself this time.”

What Donald Ray Pollock has created in The Devil All the Time is a dark, engaging portrait of human nature. He shows us what happens when there is nothing to believe in, when there is little chance of things getting better, when instead of the grace of God whispering in your ear it’s the devil—all the time. This novel is not for the weak of mind or heart. It is for the devout, those with strong character and a firm grip on their own ascent into heaven.

6 responses to “Review of The Devil All the Time, by Donald Ray Pollock”