Anthony Doerr’s sentences are as perfect and precise as the crystals and seashells he writes about. Open his new novel to any page, pull out any sentence, and you’ll find his lyrical perfect pitch. “That first peach slithers down his throat like rapture. A sunrise in his mouth” he says about his protagonist. We could say the same thing about Doerr’s prose. 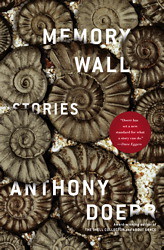