As part of my preparation for my interview with William Gass, I began April with a reread of Conversations with William Gass. Once again, I highly recommend Conversations as it offers a great mind essaying off-the-cuff, and doing it brilliantly. I followed this with a reading of Flann O’Brien’s At Swim-Two-Birds, another of Gass’s fifty literary pillars. It’s an incredibly elaborate orchestration of metafictional play and stylistic counterplay. Seamless collage of seemingly disparate elements like pulp genres, Irish folklore and mythology, and frame within a frame within a frame tales is one mark of its formal inventiveness. One of the joys of At Swim is getting tangled in, and having to disentangle yourself from, the various threads, and following all the characters in and out of their nested boxes. As to be expected from a novel about a writer writing about a writer writing a novel, there’s a lot of commentary about writing: “There are two ways to make big money, he said, to write a book or to make a book.” And this was the remark that “provoked” a group of pseudo-intellectuals to have a “discussion on the subject of Literature-great authors living and dead, the character of modern poetry, the predilections of publishers and the importance of being at all times occupied with literary activities of a spare time or recreative character.” Love that capital “L” there! This whole passage, with the bits about how the room “rang with the iron of fine words,” how the “names of great Russian masters were articulated with fastidious intonation,” and how psychoanalysis “was mentioned-with, however, a somewhat light touch,” is hilarious. And I think this statement: “Characters should be interchangeable as between one book and another,” is critical, too, since it’s a justification, of sorts, of all the overlapping and juxtapositions of characters and settings throughout the course of the novel. 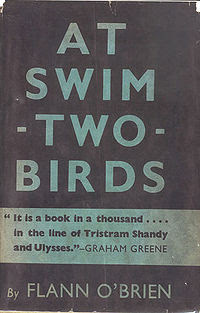 Over at arts blog Big Other, they’re gathering together a reading group for Flann O’Brien’s great comic masterpiece At Swim-Two-Birds, to be consumed at an approachable-yet-respectable clip of 100 pages/week. See AD Jameson’s post about reading guides for the complex-ish modernist book. But don’t be scared! To fully enjoy O’Brien, you really needn’t be equipped with anything more than a good sense of humor and a love for language. I highly encourage people to read along, or at least check in from time to time to listen in during the ensuing book banter.