“Thank you for your interest in Zoetrope: All Story,

We are a staff of two, assisted by a small team of brilliant and generous volunteers, who are collectively dedicated to reading and responding to the 12,000 submissions All Story receives annually…

…All-Story does not accept submissions via e-mail. Send stories to:…” 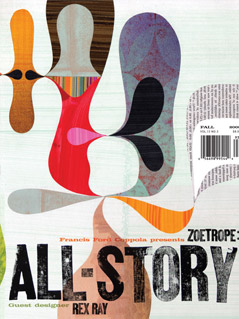 The above guidelines come from Zoetrope: All Story, one of the top tier literary magazines of today. My response:

Your submission guidelines are fucked up. Snail mail had a purpose…once. There are better options, and the time is now.

The list of deservedly established writers published at your magazine is formidable: Chimamanda Ngozi Adichie, Woody Allen, Margaret Atwood, Julian Barnes, Roberto Bolaño, Robert Olen Butler, Don DeLillo, Mary Gaitskill, Kathryn Harrison, Ha Jin, Jonathan Lethem, Yiyun Li, Naguib Mahfouz, Alice Munro, Salman Rushdie, Kurt Vonnegut, & David Foster Wallace. Many writers would love to join this crew, do not mind submitting, and hope to be “discovered” on the slush pile. Yet how do the majority of your authors submit? I doubt Woody Allen stuffs an envelope and drops it in the mail, fingers crossed, hoping Zoetrope will make his proverbial day. But that’s what you demand of the regular scribe, and while all writers are not stereotypical “starving artists,” they would love to save a dime or two, unlike ol’ Woody, who can afford the postage. Yeah, yeah, yeah, I know, Woody’s earned the privilege, but then why bother taking submissions from the masses? No matter how good an unknown’s story is, Woody and friends aren’t gettin’ bumped. Fetid grapes aside, The New Yorker now accepts E-subs, but even The Diddle Ass Review should. And so should Zoetrope.

Electronic mail or submission managers are no longer science fiction, and function more efficiently than snail. E-subs might create an overflow of stories, but there are solutions: short windows for submissions or charging nominal fees (not writer friendly, either, chief sinner Narrative Magazine, charging nasty clam so they can pay all the writers they solicit, but that’s another rant). Here’s the analysis:

Time at printer preparing envelopes, etc. @five minutes/submission = 100 hours (not to mention time spent by “brilliant and generous volunteers” who, with Bartleby-like futility, refine skills in a Sisyphean search for fabulous stories that will never be accepted by Zoetrope)

Fifty Zoetrope clones would push the cost over a million dollars. Smaller mags? Every 100 subs/month = $2,232/year. Yet as the smaller mags regularly publish from slush, the waste not as egregious.

Zoetrope, your guidelines continue: “Before submitting, non-subscribers should read several issues of the magazine.” What a deal! I’m sure you’re not intentionally trying to screw writers, but c’mon, this is way totally like effin’ really just absolutely too fucked up.Certainly, writers should do their part, not waste editors time with inappropriate submissions, and buy, read, and support literary magazines; that’s yet another topic. Bottom line: writers might buy more magazines if they had more money, and they might read more if they had more time. Right? If one writer has ten stories and submits each story twenty times that’s over $350 a year a writer could spend on food, rent, books, and subscriptions to literary magazines. Sure, Zoetrope, you are not the only guilty party. Those lovable stalwarts over at The Sun, despite their concern about social issues, environment, and poverty, refuse to evolve. Others? The list includes The Atlantic, Crab Creek Review, Creative Nonfiction, The Georgia Review, The Iowa Review, The Texas Review, Zyzzyva, etc., not to mention the publishers and agents that postpone electronic. The cost rises into millions of dollars, a forest of paper trees, and oodles of wasted hours. So Zoetrope and cohorts, big and small, agents and editors and publishers, take heed: Stop the snail. Or be fucked up.

The thing about a breakup, for a writer, is that it can be crippling, like a baseball bat to the shins. Up until recently, I was on a roll. Ideas galore, inspiration flowing from everywhere. Two stories finished in a month, ready to be polished, edited, submitted. Published author, here I come!

When my then-fiancee called with the phone call rejection notice – yes, it was a phone call, but we were 750 miles apart – all progress stopped. I jumped in the car and drove home to salvage what I could, to talk it out. Surely, a mistake was made. All I had to do was get her to see that everything could be fixed, we could be put back together.

I couldn’t write a word. I tried. I sat in a hotel room in Madison, staring at the computer, playing Scrabble online instead of thinking, writing, plotting.

I searched news sites for story-worthy bits and wrote a pile of writing prompts, anything to jumpstart my stagnant creativity and to distract me from the crisis at hand. Nothing worked.

I was in the barren, infertile wasteland of the post-Apocalypse.

Okay, so that’s a bit melodramatic.

The blinking cursor taunted me until I closed the laptop and watched Monday Night Raw. It was that or syndicated episodes of Everybody Loves Raymond, and I despise that show.

I gave in to my block, let it take over. This, for a writer, is like drinking arsenic to cure a cold.

During the next few days, I was preoccupied with relationship stuff. I met my ex and we talked about where things had faltered, who hadn’t done their part, where we would go from there. It wasn’t going to work, we decided. We were two different people, neither ready for marriage or anything it entails. I was okay at first. We went to a party at a friend’s beach house along Lake Superior. We had a good time, deflected concern about us with a joint air of contentment. This is for the best, we said.

The next night, returning to the beach house, something changed. A friend’s band played an informal show in the living room. I jammed on the drum set. I watched the sun set from a sea kayak on the lake. I was having fun, but then a revelation about the relationship, about my failures as a boyfriend, broke me.

I didn’t think about writing. I couldn’t. I shut down. I had to leave.

I drove straight through from Marquette to Omaha, thirteen hours on the road, eager to find some distraction from my current anger, bitterness, defeat. I got lost in Marinette, Wisconsin, and somehow wound up circling the capital building in Madison instead of continuing on the highway. Six hours of Iowa’s flat landscape – sorry, Iowa – didn’t help matters any. I barely noticed the wind turbine fields, like science fiction forests, along I-80. The whole time, I tried to force myself to come up with an idea. A germ.

I find this isn’t the best way to deal with writer’s block. It can’t be forced. If Robert Olen Butler’s right, then it has to come from some dream-like place, not through the manufactured idea farm of the mind.

I returned to Omaha, went to a bookstore and broke out the laptop. Then, a notebook, in which I only scribbled, doodled pictures of covered wagons and guitars.

In the past, I believed that writer’s block was the author’s own creation, a reason not to write. But, this was real. I took the new Ecotone from the shelves, the current Prairie Schooner, read story after story hoping for something. It was hopeless. After six hours, I went to the bar.

The same thing happened the next day, this time for eight hours. And the next. Then a few more days after that. Every day, I texted writer friends, asking for advice. How do I come out of this? Read, one tells me. Drink more, then write, the other says. I did both. By then, the post-breakup loneliness had set in and I was getting worse. More Scrabble and crossword puzzles and World Cup soccer. Production: zero.

I met Brian, my best friend, at a bar. We talked about the breakup, how I was feeling, how my ex-fiancée was doing, about the particularly bad idea of rebound sex.

“I haven’t written a thing in days,” I said.

“Maybe you should channel your emotions into your writing,” Brian said. No way, I thought, I don’t write that sort of stuff. Breakup fiction is for Matthew McConaughey movies. But, I thought, maybe he was on to something.

This isn’t what he meant, I’m know. I’m sitting at the same bookstore I have all summer, writing out those emotions, giving life to past events. I’m feeling a break now, a small wave of my former self returning as I write this, the muse awakening from a too-long slumber.

There are no new ideas, yet, but I’m writing.