The Ones That Got Away (Prime Books) tiptoes into the darkness, luring us deep into the woods, up into crawlspaces, and to distant islands, where the people, the sacrifices, the losses are our own, our universal fears come to life. You’d think that once he surprised me, once Dr. Jones pulled that old trick where you watch the left hand while the right hand does something else that I’d be prepared for more misdirection, watching the wolf when it was always going to be the dolphin. But it’s all there, it’s always right there, a tingling sensation that runs up your spine, an itch where it settles, burrowing in, a heat up your neck flushing with realization. It isn’t misdirection. It’s an adding up of information, the sum larger than the parts. It’s coming to your own conclusion before the story ends, whispering to yourself that it can’t be what you think it is. Please don’t let him go there. It’s not a trick, or a twist, and no God as machine descends from the sky. It’s what you knew all along, it’s what you feared could be true, it’s a stiff body standing in the corner of a musty basement, the camera on a tripod tipping over, and the evil revealing itself. And it’s how the everyday people in these tales deal with these revelations when they come home to roost. 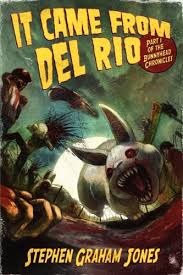 As it often is with new voices, it all starts with a dull buzz, and the sense of serendipity. Something allows the title or the subject matter or the quality of the prose to break through the daily clutter, the onslaught of suggestions and advertising, to sit with you, to hold your hand and not let go. That is the case with this powerful collection of fiction, The Physics of Imaginary Objects by Tina May Hall. For me, it started with early adopters, people like Dan Wickett at Dzanc Books and the Emerging Writers Network, and Roxane Gay at PANK. By the time I saw the cover, and tracked down a story online to get a taste of the voice, I was nearly sold. After reading “When Praying to a Saint, Include Something Up Her Alley” at her website (originally published in Black Warrior Review) I was in. All in. So very much invested. And a little bit scared.

JUDGE A BOOK BY ITS COVER.