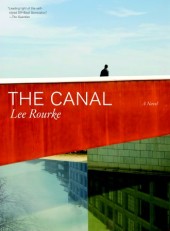 I came upon Lee Rourke somewhere through my connection at 3AMMAGAZINE.COM, and I remember his first book, (great cover) called Everyday, a collection of short stories. Mr. Rourke has imagined a world void of cliche or pop culture with his debut novel, The Canal,published by Melville House. It’s great to read a story free of modern trappings, hooks, and snares, but ultimately stripped down to bare bone emotion.

The story is told from the point of view of a man who has left his job and finds himself alone on a bench alongside a canal in London. Somehow he’s taking advantage of his boredom, actually finding some comfort in the discconection that’s come from quitting his job when he realizes there is no reason to go to work.  There is a kind of casual innocence at play here, and this man is almost regressing emotionally, taking in what’s around him, while the London he sees seems to be passing him by.  Often Mr. Rourke takes us back into the narrators past, reliving childhood traumas, or events from a life that is no longer relevant.  What’s most important to the narrator is the woman he meets on the

bench, and her story.  Once these two characters cross paths, we come to know only slivering pieces of information about her, and from what I can tell, she’s completely unhinged and totally unreliable.  The story isn’t so much about people, but it’s more about what people are like, as humans, from the kids who taunt our narrator, to the couple that sits enclosed behind the glass windows of an office building across the canal from where our narrator sits. From time to time our hero sits with this woman he’s just met, and sometimes he sits alone, but when they’re together the emotional temprature spikes wildly.

This is a rare story told with a surgeon’s eye, it’s particular and peculiar, the voice is scrubbed of any uplifting feelings, and it almost drowns in its own sadness and deep depression. This novel toggles between what the woman on the bench has done, and what kind of life the narrator has lived, over the enitre story were given glimpses of brutal reality and stark beauty, sometimes it floats on the surface of the canal, like breadcrumbs to be used by Mr. Rourke later in the story, and sometimes its just life, as it passes by everyone, including the reader.  -JR