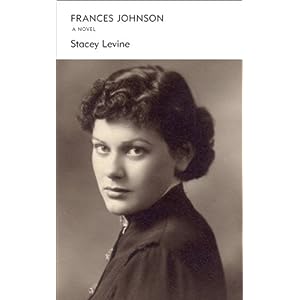 JE: A few words about Stacey Levine: Brilliant. Surprising. Unsettling. One of a kind. Check out her novel, Frances Johnson!

Says The Believer: “This is a comedy of manners, and there is an inkling of Austen in Levine’s delicate and deadpan assault on our culture s heterosexist, heterogeneous dictates. But the feel of the novel is more fanciful than programmatic. Each sentence operates in the same manner as the overarching narrative: shifting shape, defying expectation . . .” –Jason McBride, THE BELIEVER

On top of all that, Stacey is an absolute doll!

I was amazed when, as an undergraduate, I read Brazilian author Clarice Lispector‘s short story collection Family Ties. The book showed me how fiction can dig into the quiet, disturbing crevasses of human experience and illuminate the parts of life that are impossible to describe in straightforward language.

At the time, I was also reading American masters like Wharton and Hawthorne, whose contained styles did not prepare me for the shock of Lispector’s long, rhythmic sentences full of repetition and the ferocity of her take on the human condition. (Lispector wrote from about 1943 until close to her death in 1977).  Even in translation, her writing is as disturbing, beautiful, and complex as life really is:

“[The girls in the orphanage] had concealed from the nuns in charge the death of one of their companions. They kept her body in a cupboard until Sister went out, and then they played with the dead girl, bathing her and feeding her little tidbits, and they punished her only to be able to kiss and comfort her afterward.”

Lispector’s translators have tried to replicate her lyricism and syncopated phrasing in English. In Portuguese, her work must be incandescent. In stories like “Preciousness,” “The Smallest Woman in the World,” and others, the narratives often launch from small, everyday occurrences, like a spilled bag of groceries or a trip to the zoo. I was excited to see that Lispector doesn’t really emphasize plot or even character, but instead puts forward her finely-wrought observations and questions about existence. And her staggering sentences intensely-packed metaphors.  “The Buffalo” describes a lovesick woman watching animals at the zoo:

“But the giraffe was a virgin with newly shorn braids. With the innocence of that which is large and light and without guilt. The woman in the brown coat looked away—sick, so sick. Unable—confronted with that lovely giraffe standing before her, that silent wingless bird—unable to find within herself the critical point of her illness, the sickest point, the point of hatred, she who had gone to the zoological gardens in order to be sick.”

Back then, I read these sentences repeatedly and they got into me as sound and inspiration. The stories contain unique music and made me want to write.

Lispector also wrote The Passion According to G.H. , a novel in which, gloriously, the major plot point is that a woman closes an apartment door on a cockroach and kills it. But she’s at her best in the short story form. I can sometimes hear her sentences ringing while I’m writing sentences. I’ve thought about her stories a lot, not only because I’m impressionable, but because her work is world-class literature that withstands the test of time.