And then we get “the last rank in the armies of law” below the clever junior partners who are below the full partners who dined at the Century Club. August seniors who couldn’t urinate and those who couldn’t stop. I’ve only paraphrased Salter’s sentences. But notice how the last sentence, even in paraphrase, stops at “stop”. And we get not “the law” which would put us in a cable police procedural, but just “law” which means it’s your crowd. We also get that they were living in apartments with funny furniture and sleeping until noon on Sundays. Hierarchy, irony, swiftness, secularism, style, power, money, stacked vertically: New York. Just one paragraph.

II. Frank and Alan catalog the available girls at the firm and the girls that they wish were. It’s a catalog like they are petty Don Giovanni’s. JS is always providing us with poetic sequences in the form of these lists. It’s like the modulating chords in a Mozart symphony. The listings transition you.

The period in this list of “girls”…and I’m using the word in the text…is Brenda. And the guys end up at her apartment, too late for a party. Knock out image: rolling around the walls kissing as the dusk settles in. The sense of New York apartment light: for most diffuse, bouncing off a thousand buildings and two rivers before it gets to you. Brenda has the same kind of furniture her mother had, sits in the same kind of chair, only she does everything her mother wouldn’t. Exchange of office news: “Jane Harrah got fired.” Brenda said. “That’s too bad. Who is she?” 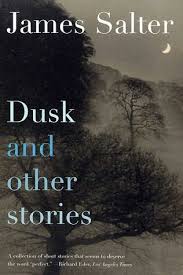 III. Frank and Alan jump-start to the next level by being more unscrupulous than their own management. They form a partnership and steal a lucrative client away from their own firm. The case settles out of court and their fee is a percentage of the deal, millions. They don’t get prosecuted for this. I don’t know if that’s possible. But Salter implies that the dumb shits got lucky and got away with it. It’s like they stumbled into a fortune at Las Vegas. It’s unethical but now they are rich.

This third part of the story transitions to the continent where the guys seem to be giving the worse kind of imitation of eurotrash. It’s always Frank in the lead with Alan as the follower. I appreciated how well JS sets up this relationship, this tacky friendship, so the reader sees a dynamic…not just two guys blowing away thousands on credit cards in Europe, spending themselves into boredom. Buying people too, in this case a young woman, a student they pick up, throwing thousands in gifts at her as if it were just so much shit.

The uselessness of inappropriate wealth. The waste. They are still the guys from the office. On the make for the girls. They haven’t learned anything. And they are even stupider than they were before. But here’s a great throwaway line from Venice: “On the curtained upper floors the legs of countesses uncoiled, slithering on the sheets like serpents.”

You’ll find pleasures both sacred and profane in the short stories of James Salter. But you are encouraged to be a connoisseur of the word if you want to appreciate them. This is a discussion of ‘American Express’ from James Salter’s collection, “Dusk and other stories”.