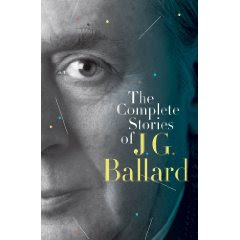 This is a dramatic collection, the weight of the book alone makes you feel like you’re holding something substantial.  I’ve never been a huge SF fan, I love Alien, and Blade Runner, anything about the end of the world, that stuff gets my attention.  Jonathan Lethem wrote a really great essay on J.G Ballard recently (here), and it reminded me of Lethem’s roots in the genre, and he made a point that the stories aren’t all flying saucers and alien’s eating human flesh.

My own mother loved the story in The New Yorker that came out the week J.G. Ballard died,  “The Secret Autobiography of J.G.B.” and after reading it I was convinced that this guy might have more in store for me than what I knew, or should I say hardly knew.  Crash, and Empire of the Sun are both great movies, at least until Spielberg puts his soft sticky stamp on one, and the sickness known as David Cronenberg who with his adaptation unsheathes a thirteen karat zirconium train wreck on movie goers.  It’s interesting to see how filmmakers take to Ballard’s harder stories, and I could see many modern cinesates frothing over this collection, casting the rolls as they read the book. “The Secret Autobiography of J.G.B.” convinced me that the world had ended, and this was the only place “to be”.  If that makes any sense.  There was a something very attractive about the desolation, it’s the adhesive quality of that story, for sure. How life can start again after everyone is gone, as long as everyone doesn’t include you.

“End-Game” is nothing more than a man doing the same thing over and over and expecting something to change. Which is the long way of saying Constantin, the jailed hero of this story, is insane. Malek, his personal executioner is there for the long haul.  They are both confined to a villa without any furnishings, it’s just them and a chess board. Over time, and many games of chess, you get an ear full from Constantin as he discusses his circumstances, at least how they relate to his imprisonment and his death, soon to be, at the hands of Malek.  This is like watching a drowning man reach for anything that will save him, or a crook say anything to get out from under the point of a knife. Ballard sets his men apart by good and evil, looming death plays a part too.  I’d like to think that the theme here is that life is short, and none of us know when it will end or how, and Malek, or a man like him, will come to our homes like an unwanted visitor.  Constantin almost succeeds in convincing the reader that he should get another trial, but Malek proves otherwise, not with a death blow, but with the words of a wise old man.

“Minus One”, is the next story in the collection and falls suspiciously into your lap, it’s not there for long, but it’s an effective example of what Rod Serling was trying to do with The Twilight Zone.  To be honest I don’t know who influenced who, I can’t see how it matters, but there is a connection, especially with this story.

Ballard takes us into the throat of a sanitarium, asylum, dry out ranch, whatever you want to call it.  Immediatley there is something wrong, a patient is missing. Mr. Hinton has gone away, disappeared like car exhaust.  He was there and then he wasn’t. People are blamed, the people in charge, and suddenly common sense prevails. Watch as Ballard proves the impossible, if Mr. Hinton can’t be found, did he ever really exist? Could it have been a typo on the registration of another patients intake forms? Was he imagined? Of course, that’s the answer. I wouldn’t be doing you any favors if I told you what really happened.

Christmas is coming, you can make someone happy here.